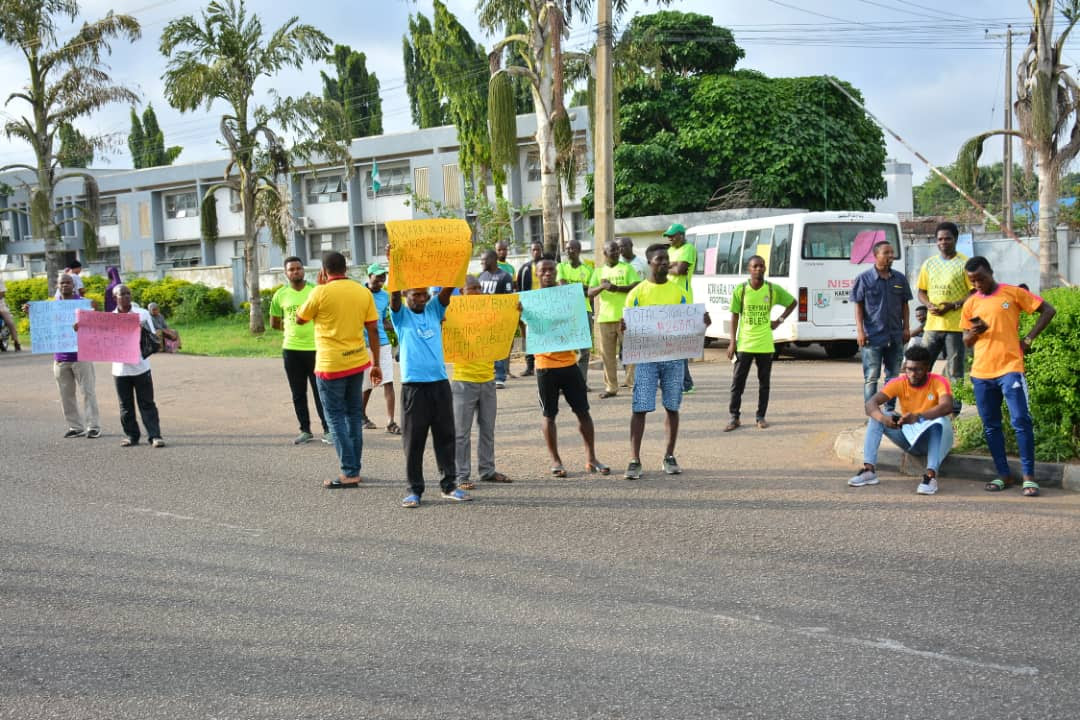 Players and officials of Nigeria Professional Football League (NPFL) side, Kwara United FC of Ilorin, on Monday took their protest over unpaid salaries to the state’s Ministry of Finance.

The players and officials clad in their club’s official kits carried placards with different inscriptions, demanding millions of naira in unpaid sign-on fees and salaries.

The News Agency of Nigeria (NAN) reports that the protesters barricaded the entrance into the Ministry of Finance, denying workers access to their office as at 11:45 a.m.

The captain of the club, Akeem Onigbari, told NAN on the sidelines of the protest that they were protesting because of the backlog of sign-on fees and salaries.

He insisted that the protest would continue until their demands were met.

“They are owing us a backlog of sign-on fees, five to six years, our salaries have not been paid for the months of March, April and May.

“We have been here since 7 a.m and this protest would continue until they answer our prayers.

“No one has been here to talk to us on our demands, so we are here, ” Mr Onigbari said.

NAN reports that the team’s administrative staff had refused to report for work on Monday as they also joined the protest and were seen at the ministry while armed police officers were sighted keeping watch.

Kwara United is scheduled to play Remo Stars on Monday in a Match 21 NPFL encounter at the State Stadium complex, Ilorin.

When NAN contacted the Chairman of the club, Oladimeji Thompson, he said he was aware that the players and officials of the club held a protest.

He, however, declined comments on the issue.

NAN reports that Kwara United had failed to win in the last six games in the NPFL.

They also require a victory against visiting Remo Stars to escape relegation to the second tier of the league, the Nigeria National League.