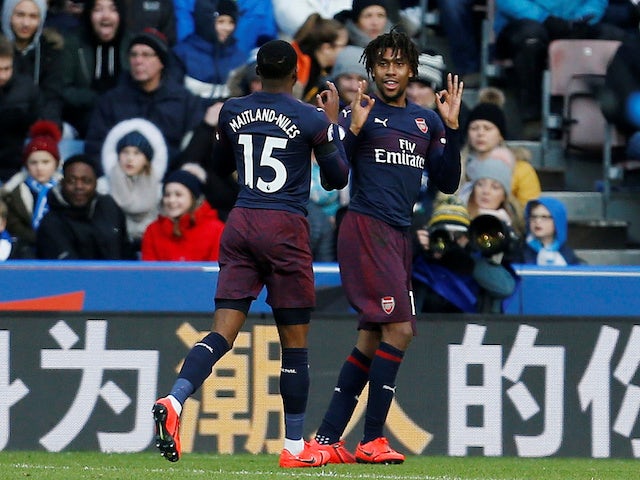 Alex Iwobi on Saturday scored his third goal in the Premier League this season as Arsenal gave their top-four push a boost with a 2-1 away win over relegation battlers, Huddersfield Town.

Saturday’s win was the first for Arsenal away from home in five games and they would be glad to have gotten the crucial three points even though they are still sixth on the log.

A stoppage-time own goal from Sead Kolasinac ended Huddersfield’s near-10-hour Premier League goal drought but the Terriers remain 13 points adrift of safety and without a point under new manager Jan Siewert.

Elsewhere, Liverpool are back at the summit of the Premier League table after they crushed Bournemouth 3-0 at Anfield on Saturday

The Reds had been knocked off the summit by Manchester City in midweek and went into today’s match off the back of successive draws and a couple of uninspiring performances.

However, Jurgen Klopp’s men were back to their best as they swept Bournemouth aside, with Sadio Mane, Georginio Wijnaldum and Mohamed Salah all finding the back of the net in style.

It could have been more for Liverpool too, but they settled with three, in the end, to take back top spot, at least until Man City host Chelsea at the Etihad Stadium on Sunday afternoon.

At St Mary’s, Sol Bamba and Kenneth Zohore scored for Cardiff City as they stunned their hosts, Southampton 2-1.

Earlier in the day, Manchester United shot into the top-four after they trounced Fulham 3-0 at Craven Cottage.

Paul Pogba scored a brace in that game as the fairy tale run for the Red Devils under caretaker manager Ole Gunnar Solksjaer continued.

With the three points gotten against Fulham, Manchester United will finish a day in the top four of the Premier League for the first time since the very first day of the season, when they finished top courtesy of beating Leicester 2-1.

2019: I have nothing against Christians in Kaduna – El-Rufai