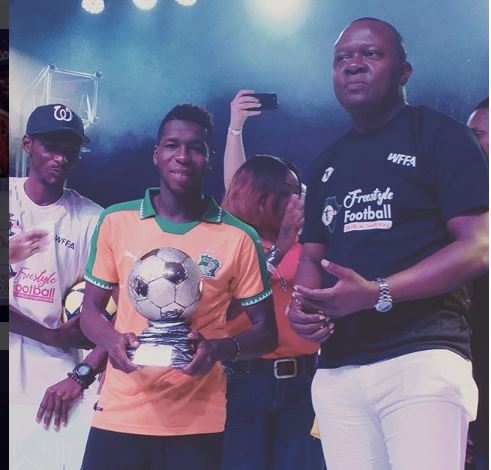 Abdou Kader Kone of Cote d’Ivoire over the weekend emerged as the champion of the maiden edition of African Freestyle Football Championship held in Lagos.

The 26-year old finished tops ahead of all the other competitors from across Africa to clinch the $3,000 prize money and a brand-new salon car by GAC Motors, one of the major sponsors of the event.

Kone, who got many fans on their feet with his skills, defeated Yousef Ayman Reiesco of Egypt in the keenly-contested final.

Heading into the final, Riesco was deemed as the favourite by many after a series of spellbinding displays at the quarter and semi-final stages.

Unfortunately, the North African ball joggler failed to lift his game when it mattered most and that cost him dearly as his Ivorian counterpart saved the best for the last and was undisputedly pronounced as the new African champion.

As part of his reward, Kone will be flown to England to perform during the half-time of a Premier League match.

Riesco, on his part, pocketed $2, 000 while third place winner Abdullah Emad of Sudan and Ashley Mkhize of South Africa who placed fourth got $1, 000 and $500.

Though the Nigerian male competitors failed to get past the quarterfinals, Rasheedat Ajibade gave the country something to cheer; winning the female version thus adding the African crown to her national title.

Aside from the ball joggling skills displayed during the three-day African Championship, there was also lots of entertainment.

Top music artistes like Reekardo Banks, Falz as well as those from Cameroun, Rwanda, and Tanzania all took their turns to entertain the crowd.

In his remarks, chairman Feet and Tricks, organizers of the tournament, Valentine Ozigbo expressed satisfaction at the event, describing it as a huge success.

He thanked the numerous sponsors that contributed to making the maiden African Championship a reality.

“We are very grateful for you all believing in us. We will be counting on you for more support as we are ready to work round the clock to ensure that freestyle football in Africa assume a huge popularity and a much higher standard in the coming years,” he said.

Buhari to flag off the Osun basic health provision fund