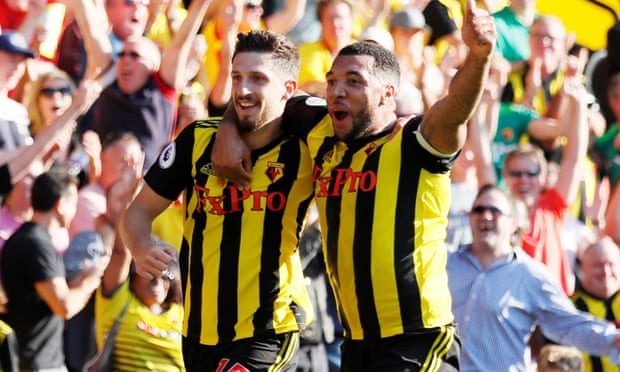 Nigeria international, Isaac Success, and his club teammates have set a record for Watford following their 2-1 win over Tottenham Hotspur on Sunday.

Sunday’s win was the fourth for the Hornets in as many games this season in the league. It is the first time ever they would enjoy such run in the top flight.

Success was introduced into Sunday’s game in the 70th minute just after Watford restored parity against Spurs who had taken the lead luckily in the 53rd minute off an own goal.

Craig Cathcart scored what turned to be the winning goal in the 76th minute as Success and his Watford teammates held on for the historic win which keeps them level on 12 points with Liverpool and Chelsea, the other two teams with a perfect start this season in the Premier League.

In the other Sunday games, Nigeria’s Alex Iwobi was not in action as Arsenal emerged victorious in the five-goal thriller against Cardiff City.

The Gunners battled to 2-3 win over Cardiff City on Sunday in their Premier League clash.

Elsewhere, Manchester United returned to winning ways after they beat Burnley 2-0 on Sunday in their Premier clash away for home.

Romelu Lukaku got the two goals for the Red Devils, but there was a sour point as substitute Marcus Rashford was sent off in the 71st minute for pushing his forehead into Phil Bardsley’s head.

SATIRE SATURDAY: Of Buhari, Trump and that 2-minute lifeless encounter

SATIRE SATURDAY: Of Buhari, Trump and that 2-minute lifeless encounter