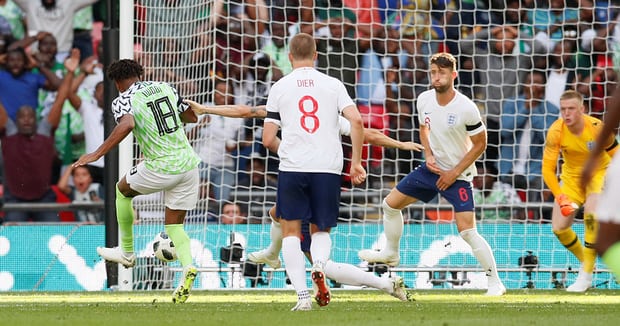 The third meeting between England and Nigeria will have great repercussions for the starting lineups for both countries with the 2018 FIFA World Cup just days away.

The Nigerian team has produced two wobbly performances in their last two Grade A friendlies – a 2-0 loss to Serbia and an uninspiring 1-1 draw with Congo DR last Monday.

The Super Eagles will have their full repertoire for this encounter while the England manager, Gareth Southgate, is expected to continue his team’s familiarisation with his favoured 3-5-2 formation.

Tagged a ‘World Cup’ match by Gernot Rohr, the action begins at Wembley Stadium by 5:15pm. Stay with PREMIUM TIMES for Live Updates.

Jesse Lingard gets the game underway for England

GOAL!!! England in front as Cahill nods in the ball

The hosts take the lead after just seven minutes, and it is a thumping header from Cahill.

Another corner kick for England.. Ashley Young swings it in

Shot by Raheem Sterling but Leon Balogun blocks for a corner

England dictating the pace… Nigeria yet to settle into this one

Mikel, Moses and Onazi swallowed up here… The Eagles not yet in this game so far

Pickford, the England keeper has virtually been on holiday in this game

Iwobi does too much and commits a foul against Dele Alli

CHANCE… Sterling takes a shot but over the bar

Uzoho does not make the best from that shot.. poor one by the Nigerian goalkeeper

One minute added time at Wembley

First Half Analysis: The Eagles have been poor – both tactically and physically. Ogenyi Onazi and Joel Obi – the two midfielders supposed to be the ball runners and winners have fallen flat, especially Onazi, who has been robbed of the ball on at least four occasions in that first half.

The ball has to get to Mikel and Victor Moses more. Gernot Rohr is expected to send on John Ogu and Oghenekaro Etebo for the ineffective Onazi and Joel Obi.

Second half back underway

GOALLLLL.. Iwobi pulls one back for Nigeria

The Eagles have made a couple of changes at the break, with Tyronne Ebuehi and Kenneth Omeruo replace Shehu and Leon Balogun.

Sterling goes down in the box but no penalty for England

Wasteful effort by Victor Moses as his shot goes wide

YELLOW CARD! Sterling gets a yellow card for diving, and it is the right decision.

Ahmed Musa comes in for Moses

Clash of knees for Walker and Ighalo

Another collision between two Nigerians.. Omeruo and Etebo hit each other

Rohr decides to bring in Iheanacho for Ighalo