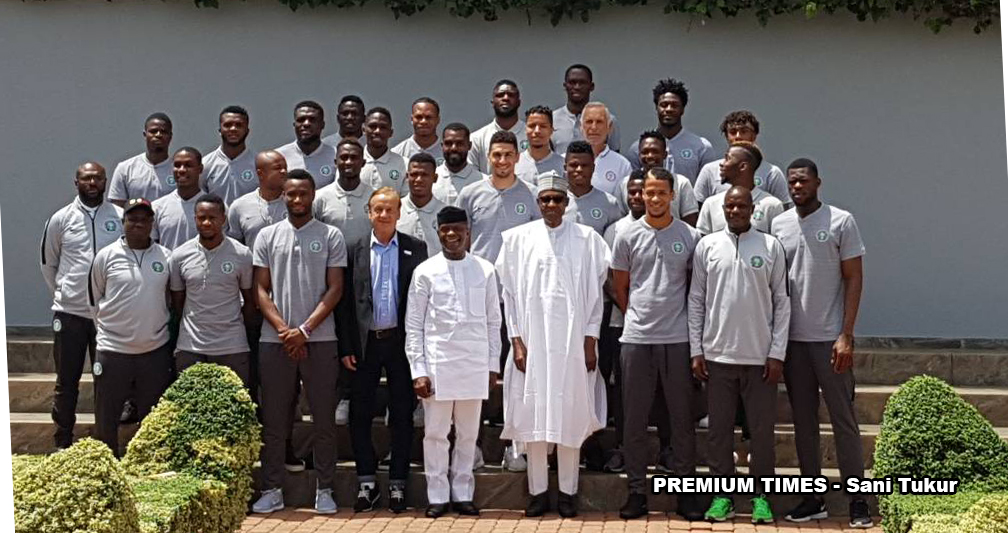 President Muhammadu Buhari has charged the Nigerian national football team, the Super Eagles, to “play fair and clean” in order to win matches at the forthcoming FIFA World Cup tournament in Russia.

Mr Buhari gave the charge on Wednesday when he hosted the team to a reception inside the council chamber of the State House Abuja.

He told the team that since they are going to represent Nigeria in Russia, they should “bear in mind that you are not just going for a tournament. With each game, you must remember that you are carrying the passions, emotions and feelings of over 180 million people.”

“Play fair and clean but demonstrate the gallant spirit which Nigerians are known for,” Mr Buhari said.

Nigeria is grouped alongside Argentina, Croatia and Iceland in the global football fiesta which begins on June 14.

“Nothing unites Nigerians more than football and nothing will gladden the people of Nigeria than for you to acquit yourself honourably by winning in Russia,” Mr Buhari also said.

The president reminded the Super Eagles that they are the youngest team in the tournament, which means they are “likely the most inexperienced team.”

The president said “it is also something that you can use to your advantage.” He assured the team that they have the support and blessings of all Nigerians.

Mr Buhari commended the Nigerian Football Federation (NFF), for drawing up the right programme that is, ”helping to refine the team to the powerful force it’s meant to be.”

“This is our time, we look up to you to make us proud. All Nigerians join me in saying to you, best of luck,” Mr Buhari said.

Speaking earlier, NFF President, Amaju Pinnick, said the body under him will cease to rely on government for funding in the next two years.

Mr Pinnick commended the president for creating the enabling environment for prosperity and stability in the footballing community.

“Our dream is to create a culture of football sustainable development and that has been one of the plans in which we took when we came into existence. In truth, you have done what no other president in the history of Nigeria has done. 32 years ago with your magic wand, Nigeria won the U17 World Cup.

“Our dream beyond enabling all these things is to create a self-sustaining football federation and within the next two years, I can assure you the NFF will be running on its own without any funds from government,” Mr Pinnick said.

The NFF President also told Mr Buhari that many Nigerians are working in international global committees.

”The only female member of FIFA Ethics six-member committee which is FIFA’s own ‘EFCC’, the only African, is a Nigerian, Justice Ayotunde Philips,” he said.

“Today, we also have a Nigerian as the President of CAF Appeals Board. We have 10 Nigerians serving in 10 major committees because you made this possible for football to grow in Nigeria,” he added.

Mr Pinnick also thanked Vice President Yemi Osinbajo for inviting the NFF to a meeting of the Economic Management Team to present a paper.

He said the British Government makes £2.6 billion as taxes from the English Premier League (EPL), adding that: ”we can also do in Nigeria”.

Mr Pinnick thanked some Nigerian companies that have supporting football.

“It is because of their support that we know that in the next two years, we will be 100 per cent self sustaining. One of such companies is Aiteo. Every year, this company commits N1.2 billion to the funding of specific activities and it is on that basis that you did not hear that coaches are being owed, players are being owed. Nobody is being owed,” he said.

The NFF boss told the president that the current Super Eagles “is (are) the most disciplined, the most united in the annals of football in the country.”

Mr Pinnick said because of the confidence he has on the team, “by the special grace of God, we will come back to this same chamber with the trophy.”

Meanwhile, team captain, Mikel Obi also told Mr Buhari that for the first time (in recent years), ”the team is heading to a major tournament free of any squabble.”

“Like the NFF President said, this is the first time we will be going to a tournament like this without any issues on money, bonuses or anything like that. I think everything is sorted now for us and all we have to do is to go out there as players and make this country proud. And with your support as the father and leader of this country, we will go out there, give our best and come back with the trophy,” Mr Obi said.

Coach of the team, Gernot Rohr, however, toed the path of caution.

He told the president that the team is placed in a difficult group and that to qualify from the group is the first step.

”But I think the players are able to do it,” he added.

He said the Eagles will go to Russia “conscious of the glorious outing of their predecessors while determined to make history themselves.”

He said the team has already started on a positive note by qualifying in style for Russia 2018.

”The Super Eagles shocked all doubting Thomas by not only qualifying for Russia 2018 but doing so remarkably with a match to spare. Furthermore, they became the first team in Africa to qualify for the tournament,” he added.

World No Tobacco Day: WHO urges countries to raise taxes