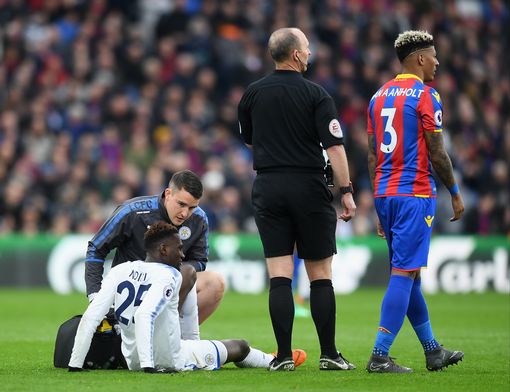 Nigerian players in action in the Premier League on Saturday were condemned to different fates.

For the duo of Kelechi Iheanacho and Wilfred Ndidi, they were beaten black and blue, losing 5-0 to Crystal Palace at Selhurst Park.

Ndidi suffered double pains following an injury sustained in the same game which led to him being pulled out five minutes into the second.

While the severity or otherwise of Ndidi’s injury is yet to be ascertained, Leicester City coach Claude Puel has given an indication that the Nigerian star has cupped a hamstring-related injury.

When questioned about Ndidi’s injury, the Frenchman said: ”I’m feeling bad for him. It’s a hamstring injury. I hope it’s not bad and he can make the World Cup”.

This season, Wilfred Ndidi has played 45 games in total for club and country, logging 3,920 minutes.

He now joins the Super Eagles’ injury list which already has Eddy Onazi, Leon Balogun and Tyronne Ebuehi who are all struggling to be fit in time before the provisional World Cup list is announced.

While it was all gloom for Ndidi and Iheanacho, the reverse was the case with Victor Moses who had yet another nice game for Chelsea who kept their quest for a top-four finish on track with a lone goal win over Swansea City.

Cesc Fabregas got the all-important goal for the Blues as he reached a new milestone of 50 Premier League goals.

Fabregas is the third Spaniard to achieve this feat after Fernando Torres and Diego Costa.

In one of the other games, Dusan Tadic scored twice as relegation-threatened Southampton boosted their chances of Premier League survival with a 2-1 victory over south coast rivals Bournemouth.

Elsewhere, Cenk Tosun and Idrissa Gueye scored in either half as Everton piled the pressure back on relegation battlers Huddersfield with a 2-0 win at the John Smith’s Stadium.

David Wagner’s men are now just three points ahead of Southampton while Everton are now four clear of Leicester in eighth place.

Meanwhile, at Turf Moor, Burnley are virtually assured of European football next season for the first time in over 50 years after picking up a point in a 0-0 draw with Brighton.