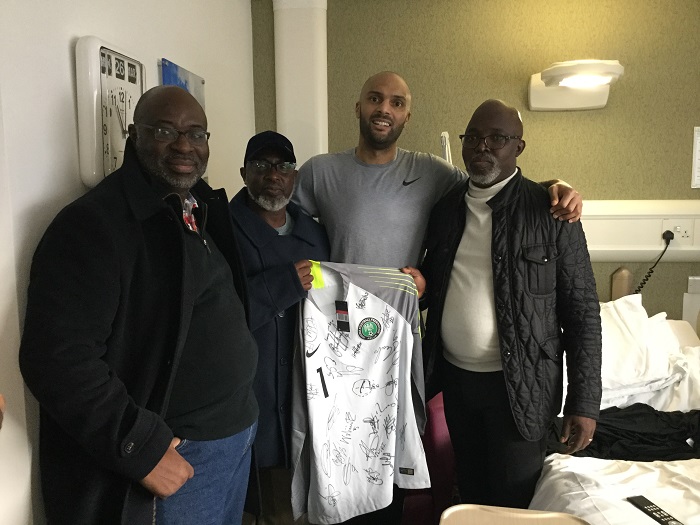 The Nigeria Football Federation President, Amaju Pinnick, has assured that recuperating Super Eagles goalkeeper, Carl Ikeme, will get his fair share of the World Cup qualification bonus due to the Nigeria national team.

The NFF president, as well as the 1st Vice President, Seyi Akinwunmi; and General Secretary, Mohammed Sanusi visited Ikeme at The Christie Clinic in Manchester, where he is being treated.

Pinnick said: “We have come on behalf of the Government of Nigeria and the NFF to check up on you, find out how your recovery is going and to tell you that you are still very much on our minds and a member of the Super Eagles of Nigeria.

“We have also come to seek your permission to be our special guest at the pre-World Cup friendly game against England at the Wembley Stadium on 2nd June. We want you to perform the customary kick-off of that game and if you approve of it, we will immediately request this of The Football Association.”

The NFF boss further assured the goalkeeper that he would be fully captured in the team’s financial benefits for Nigeria’s qualification for the FIFA World Cup “as we all remember the role you played in helping us get off to a winning start in the final phase of qualifiers in Ndola against Zambia.

“We believe this is just a phase that will pass away. You will come out of it stronger and still be able to do what you love to do the best, both for your club and the Super Eagles of Nigeria.”

Ikeme became the Super Eagles’ first choice goalkeeper months before the Russia 2018 FIFA World Cup preliminary fixture against Swaziland and the first match of the group phase against Zambia in Ndola.

He kept goal in those three matches. But nine months ago, he was diagnosed with acute leukemia after returning “abnormal blood tests” during pre-season testing at English club Wolverhampton Wanderers. He has had to undergo chemotherapy.

An ecstatic Ikeme, moved by all the kind words, responded: “I am so overwhelmed by this show of love. I am indeed grateful to Nigerians who daily flood my phone with prayers and well wishes. I feel their love everywhere, every day, on social media. I thank the Government of Nigeria and the NFF for all the support and I appreciate my teammates so much for being there for me.”

I killed my girlfriend for refusing to abort pregnancy – Student

Why we apologised to Nigerians – PDP