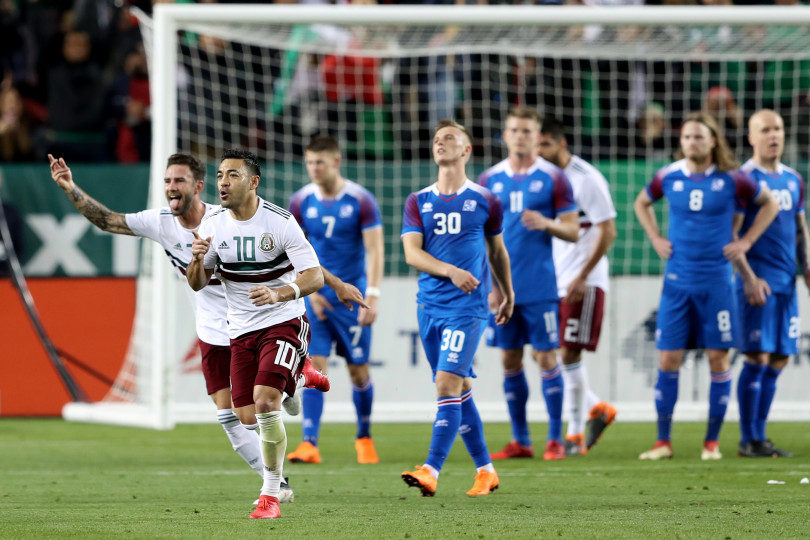 Mexico's Marco Fabian (10) celebrates his goal against Iceland in the first half of an exhibition soccer game at Levi's Stadium in Santa Clara, Calif., on Friday, March 23, 2018. (Ray Chavez/Bay Area News Group)

Preparations for the World Cup started on a sour note for two of Nigeria’s group opponents, Iceland and Croatia, as they were beaten in their tune-up games played early Saturday.

Iceland was mauled 3-0 by Mexico in Santa Clara, California, as Miguel Layun scored a brace in the encounter.

Iceland is making its debut appearance at the World Cup in Russia where it will start out against Argentina before taking on Nigeria on June 22nd at the Volgograd Arena.

On its part, Croatia which is Nigeria’s first opponent in Russia, was beaten 2-0 by Peru.

Andre Carillo gave Peru the lead after 11 minutes when his deflected shot from outside the box wrongfooted the Croatian goalkeeper.

Edison Flores doubled their lead three minutes into the second period when he poked the ball home from close range after a quick counterattack.

Peru had Yoshimar Yotun sent off after 74 minutes but the Croatians found goalkeeper Carlos Cacida in fine form.

Croatia plays Nigeria in its opening match on June 16, before taking on Argentina five days later and then playing Iceland on June 26.

Meanwhile, Nigeria’s last group opponent, Argentina, is showing it is the team to beat as it recorded a 2-0 win over Italy in their own tune-up game.