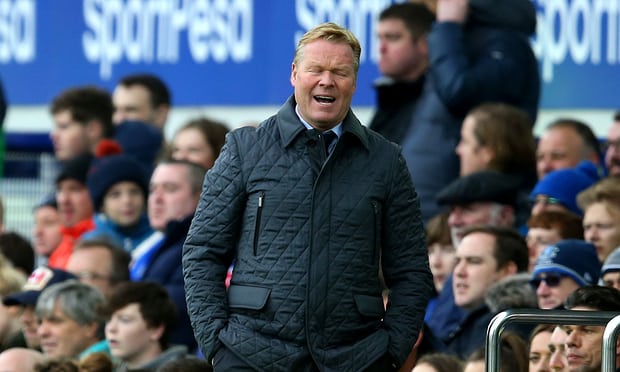 Ronald Koeman shows his displeasure during Everton’s defeat by Arsenal, a result which led to the Dutchman’s sacking as manager at Goodison Park. Photograph: BPI/Rex/Shutterstock (Photo Source: Guardian UK)

Ronald Koeman has been appointed as coach of the Netherlands national team up to and including the 2022 World Cup, and promised there was enough talent to revive the country’s fortunes.

“I‘m really positive about the future of the team as we have enough talent but we have to change some things, which I will talk about at a later stage,” he said at a news conference after being named to the job by the Dutch football association (KNVB) on Tuesday.

“I think the Netherlands should and must be qualifying for major finals and I see a bright future in that regard. That’s why I’ve taken the job.”

The 54-year-old former international defender is the seventh coach in eight years for the Dutch team, who have missed out on the last two major championships.

They were runners-up at the 2010 World Cup and finished third in Brazil four years later but failed to qualify for the 2018 finals in Russia.

They also missed out on the European Championships in France in 2016.

He will be expected to help the Dutch qualify for Euro 2020 and the World Cup in Qatar two years thereafter, reviving the team’s fortunes in the process.

Koeman, who earned 78 caps for the Netherlands, succeeds Dick Advocaat, who had been brought in midway through last year after the sacking of Danny Blind in March.

His first assignment will be a friendly against England at the Amsterdam Arena on March 23, followed by a meeting with Portugal in Geneva three days later.

The Dutch are helping the two Russia-bound teams prepare for this year’s World Cup.

Koeman said he would not be bound by the long-standing Dutch dogma of playing a 4-3-3 system.

“We need a system to get the best out of our players and to get an advantage over our opponents. The 4-3-3 system is the base in my head but it does not mean we will be playing like that against England,” he said.

Koeman has been out of work since being dismissed by Everton last October after a poor run of form by the English club in the English Premier League.

His coaching career began as an assistant to Guus Hiddink with the Dutch side in 1997, but he left after a year to take up a similar role under compatriot Louis van Gaal at FC Barcelona.