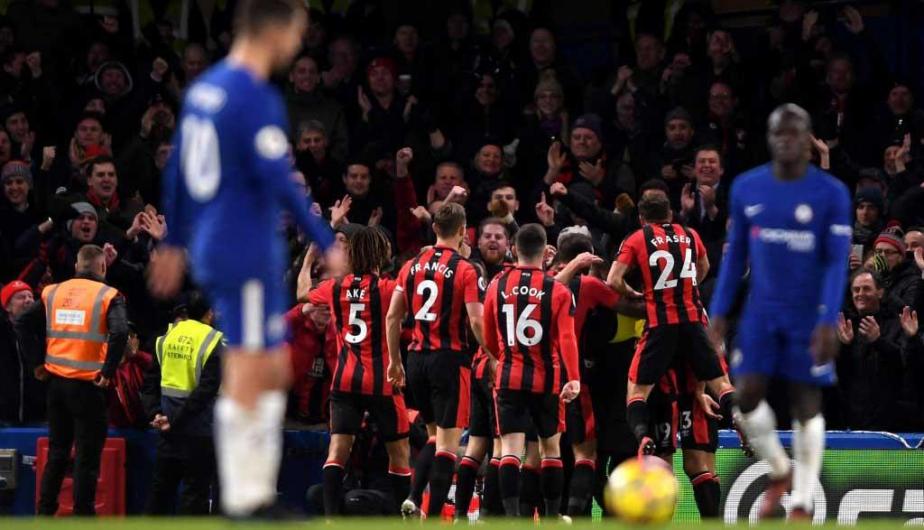 Manchester United and Chelsea lost more ground at the top of the Premier League table on Wednesday night as they both lost their games against Tottenham Hotspur and AFC Bournemouth respectively.

While Jose Mourinho’s team were thumped 2-0 by Spurs at the Wembley Stadium, it was worse for Chelsea who were stunned 0-3 by Bournemouth at Stamford Bridge.

Christian Eriksen scored after just 11 seconds as Tottenham ended Manchester United’s unbeaten run in 2018 with a 2-0 victory at Wembley on Wednesday.

Bournemouth scored three goals in 16 second-half minutes to record a sensational 3-0 victory against Chelsea at Stamford Bridge on Wednesday evening.

Callum Wilson opened the scoring for the visitors shortly after the interval before Junior Stanislas doubled their lead with 64 minutes on the clock.

While Chelsea and Manchester United were getting it wrong, it was a different scenario at the Etihad Stadium where Manchester City beat West Brom 3-0.

With that victory, City now have a 15 points cushion at the top of the table.

At Goodison Park, Theo Walcott scored twice to help Everton to a 2-1 win over Leicester City.

The other games on Wednesday all ended stalemates.