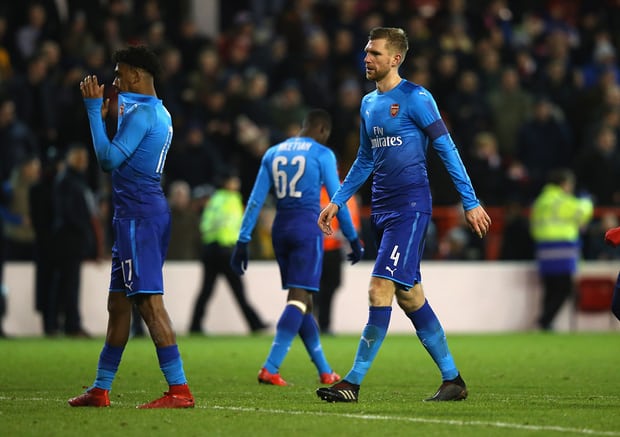 Alex Iwobi and his Arsenal teammates have been sent packing from this season’s Emirates FA Cup quite earlier than usual.

The Gunners were dumped out of the FA Cup at the third-round stage as Nottingham Forest posted a 4-2 win in Sunday’s encounter at the City Ground.

Two goals from Eric Lichaj and penalties from Ben Brereton and Kieran Dowell capped an excellent performance from the Championship outfit who are currently managed by caretaker boss Gary Brazil.

Per Mertesacker and Danny Welbeck both got on the scoresheet for Arsenal, but the Premier League side were outfought in the East Midlands.

This is the first time ever that Arsene Wenger suffered defeat in the last 64 of this competition.

Leeds United were also sent packing as they lost 2-1 away to Newport County.

West Ham will get a replay as they were able to force Shrewsbury to a barren draw away from home.