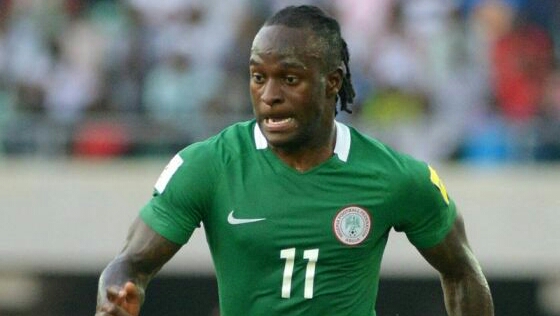 It was mixed fortunes for Nigeria on Monday as the final shortlist of nominees for the various categories in the 2017 Aiteo/CAF Awards was released.

Super Eagles star, Victor Moses, was conspicuously missing as the nominees for the African Footballer of the Year Award were named.

Moses scaled the first hurdle when the list of nominees was reduced from 30 to 11; but he could not make it into the final shortlist.

Those in contention for the continent’s top prize are Sadio Mane of Senegal, Pierre Aubameyang of Gabon and Mohamed Salah who only recently won the BBC African Player of the Year, beating Nigeria’s Victor Moses and other rivals to the top prize.

The last time a Nigerian won the African Footballer of the Year Award was in 1999 through Kanu Nwankwo and the wait to end the jinx will continue again as the country’s sole hope has been dashed.

For the female category, Nigeria’s Asisat Oshoala is still very much in contention as she looks to make it a hat trick of wins.

The China-based star will however see of the strong opposition that would be posed by the duo of Gabrielle Aboud from Cameroon and South Africa’s Chrestina Kgatlana.

Rohr qualified Nigeria for the 2018 FIFA World Cup, the first team in Africa to book a ticket to Russia.

For the team of the year, the Super Eagles and the Nigeria U-20 female, the Falconets are in for award.

The Awards Gala will take place on Thursday, 4 January 2018 in Accra, Ghana.

Below are the top three (Nominees are listed in alphabetical order);

African Player of the Year

Women’s Player of the Year

Youth Player of the Year

Coach of the Year

Club of the Year

National Team of the Year

Women’s National Team of the Year