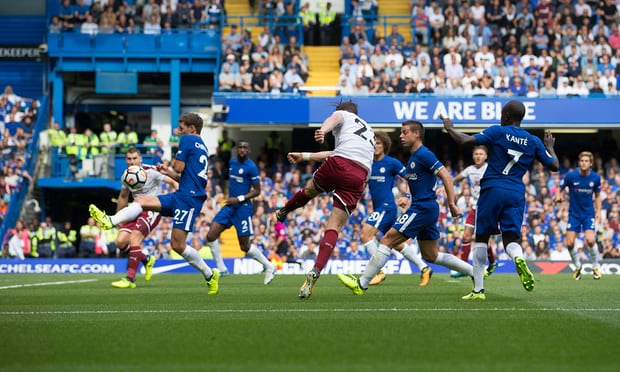 Chelsea’s defence of their Premier League title got off to a disappointing start on Saturday as they lost 3-2 to Burnley at Stamford Bridge.

It was really an awful day for Chelsea who ended the game with nine players.

After Captain Gary Cahill received a straight red card for a reckless tackle on Steven Defour just after 14 minutes of action, Sam Vokes put Burnley ahead in the 24th minute, volleying in Matthew Lowton’s cross.

Stephen Ward then doubled the lead for the visitors a quarter of an hour later with a fierce shot after a one-two with Jack Cork.

Burnley made it 3-0 before half-time when Vokes headed in Defour’s free-kick.

Alvaro Morata, on as a second-half substitute, nodded in Willian’s cross in the 69th minute.

Chelsea’s hopes of a fightback were hit when Cesc Fabregas received a second yellow card, although David Luiz extended the hope with a late goal from Morata’s flick.

Nigeria’s Victor Moses could only watch from the stands as he is on suspension for the Premier League opener.

In some of the other Saturday games, Watford and Liverpool ended their game 3-3 while newly promoted side Huddersfield Town stunned Crystal Palace 3-0 away from home.