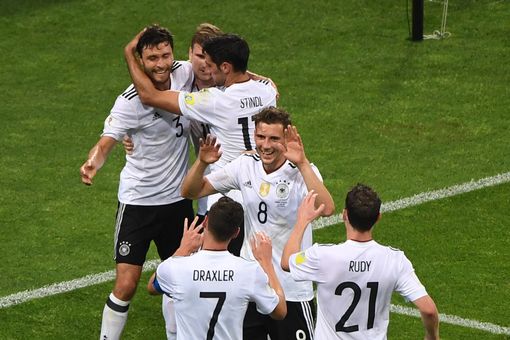 World champions, Germany, are through to their first ever FIFA Confederation Cup final. They did it in style, thrashing Mexico 4-1 on Thursday night,

The youthful German team who could afford the luxury of playing without the likes of Manuel Neuer and Mesut Ozil were still far too much for Mexico to handle on the night.

Unlike the Portugal – Chile tie that dragged into extra time and then penalty kicks, Leon Goretzka made it an easy one for Germany: scoring quickfire goals in the 6th and 8th minute with Timo Werner slotting a third in the second half.

Mexico’s Fabian scored a goal of the tournament contender when he slammed into the top corner from 30 yards, but Amin Younes finished off coolly after a breakaway to restore gloss to the scoreline.

The world champions will now face Chile in their first ever Confederation Cup final.

On their part, Mexico and Portugal will face off in the third-place contest. The two matches will be played on Sunday.