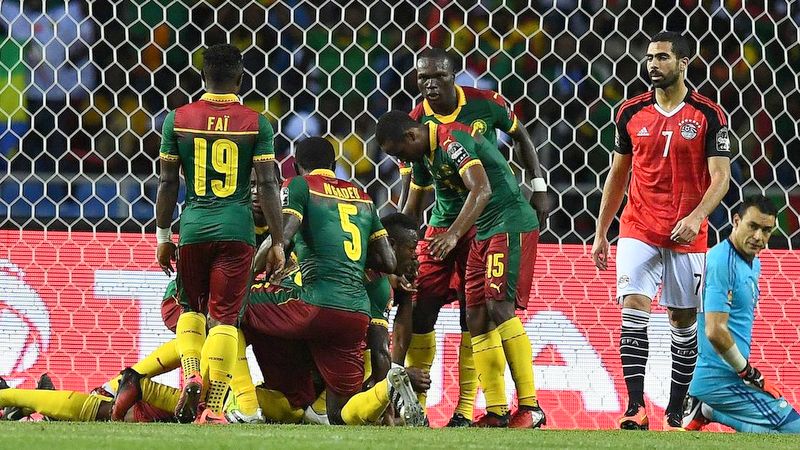 Cameroon celebrating after scoring in their game with Egypt at the AFCON
Photo: mirror.co.uk

West Brom’s Cameroonian defender, Allan Nyom, has insisted he has no regrets about not being part of the 2017 Africa Cup of Nations-winning squad.

Nyom also revealed that after initially rejecting his country’s call-up he changed his mind but Coach Hugo Broos told him there was no place for him.

After winning the trophy on Sunday, Broos said those Cameroonian players not there would rue their decision.

“He (Broos) should know that I don’t have any regrets,” Nyom said.

The 28-year-old was one of seven Cameroon players to decide to miss the tournament, with Liverpool defender Joel Matip another high-profile absentee.

After Cameroon beat Egypt 2-1 in Sunday’s final, Broos suggested “it was their decision, but maybe they are saying now to themselves ‘why didn’t I go with them’?’’

However, Nyom is adamant he made the right choice.

“I heard what Broos said. It made me laugh because he knew what happened and he knew why I was not there.

“It’s true, at first I didn’t want to go, but afterwards I changed my mind. But he knew that and he knows what he told me, so I have no worries, no regrets.

“If before the tournament they had told me `Cameroon is going to win and you are not part of the squad’, I don’t mind because I’m happy I’m playing for my club. It’s much more important for me.

“If I had been there, it could stall my club career,’’ Nyom said.(NAN)

Mortar attacks in Mogadishu as Somalia prepares for presidential election