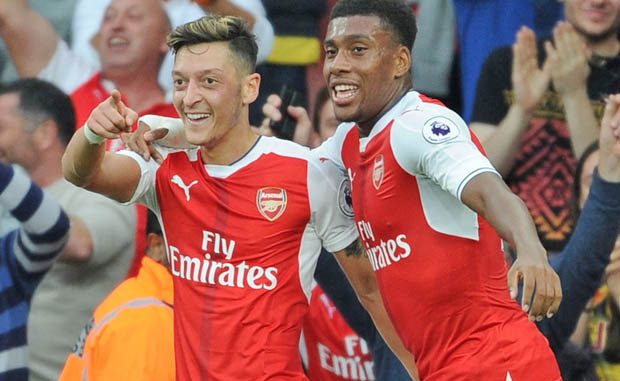 Nigeria international Alex Iwobi came in as a second half substitute as Arsenal romped to a 6-0 win at the Emirates over Ludogorets in Wednesday’s UEFA Champions League match day three clash.

Mesut Ozil struck a second half hat trick against the Bulgarian Champions as Arsenal solidified their top spot in Group A.

Two first half goals from Alexis Sanchez and in-form Theo Walcott gave the home side a comfortable first half advantage before Oxlade-Chamberlain and Mesut Ozil ‘s hat trick completed the rout after the break.

While it was a night to remember for Iwobi, it was not the same for his compatriot, Kelechi Iheanacho, whose Manchester City team were roundly beaten 4-0 at the Nou Camp.

Iheanacho did not play in the game where Lionel Messi and Neymar scored two goals each to condemn Coach Pep Guardiola to his biggest loss so far as Manchester City coach.

Elsewhere, there were away wins for the quartet of Benfica, Besiktas, Atletico Madrid and Borussia Moenchengladbach.

What Nigeria polytechnic graduates must do to equal Bachelor degree holders