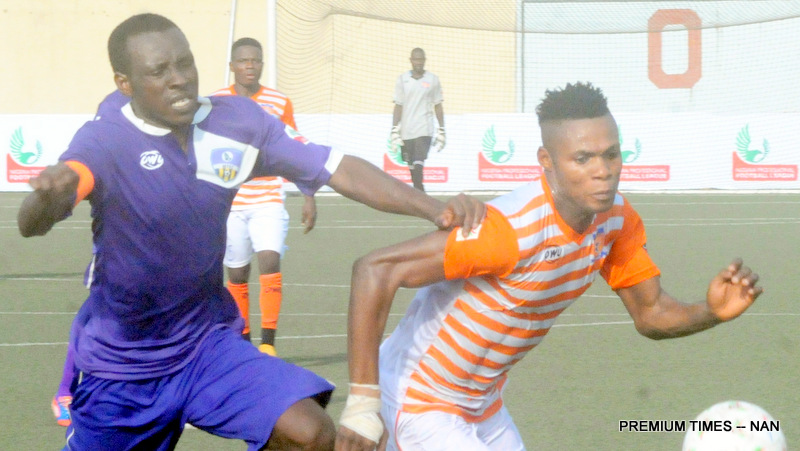 MFM FC playing a match in the NPFL

There was wild jubilation at Agege Township Stadium as Lagos-based MFM escaped relegation from the Nigeria Professional Football League, NPFL, after beating Ifeanyi Uba 1-0 as the competition ended on Sunday.

The News Agency of Nigeria reports that the tension soaked match was won by MFM through a 23rd minute strike by Stanley Okoro.

MFM in a sublime display in front of their home fans deserved the three points to stay afloat in the league.

However, the ecstatic fans that could not wait till the end of the match were jubilant at the sound of the final whistle, singing praises of their darling club.

The goal scorer of the match, Stanley Okoro, who could not hide his joy, thanked the fans for supporting the team.

“My goal is dedicated to the fans that have stood by us till these last minutes. What more can we say than to thank God who saved us from the embarrassment of relegation,” he said.

A fan, Tope Badmus, said that it would have been the most painful thing to lose two clubs from Lagos to relegation.

“This would have been an embarrassment to Lagos; imagine two teams that gained promotion same time going back to relegation same time. How do we explain that?

“This is Lagos the home of football, and we cannot stand the misfortune,” he said.

NAN reports that both teams were reduced to 10 men each after Ifeanyi Ifeanyi of MFM got a red card in the 33rd minute and Wasiu Jimoh of Ifeanyi Ubah got a straight red card.

Seye Folarin of MFM was, however, the hero of the day as he saved a 72nd minute penalty from Meduno of Ifeanyi Ubah and also made a couple of fine saves to deny the visitors victory.