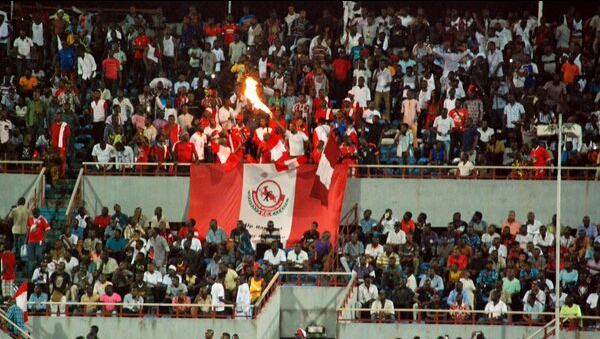 A carnival-like atmosphere is on the cards this weekend in Enugu when Rangers is expected to be officially crowned champions of the Nigeria Professional Football League 2015/16 season.

Rangers, through their official twitter handle on Tuesday, announced that the Enugu State governor, Ifeanyi Ugwuanyi, has thrown the gates open for fans to go in for free to watch the Rangers Vs El-Kanemi Warriors game live at the Nnamdi Azikwe Stadium.

The club said that the gates of the stadium would be opened from 1.00pm on Sunday and would be closed once it reaches its capacity 25, 000 seats.

“The gates for the final game of the season on 2 October at the Nnamdi Azikiwe Stadium have been declared open by H.E Gov Ifeanyi Ugwuanyi,” the first in the series of tweets from Rangers on Tuesday read.

The “awaiting champions” added: “In light of this we appeal to our endearing fans to be prompt as the gates will be open from 1pm

“Our home The Nnamdi Azikiwe Stadium has a capacity for 25,000 fans, we shall close the gates at capacity crowd so please come early.

“We have pre match and post match entertainment, so come prepared for the carnival which is @RangersIntFC,” the club concluded.

Rangers muscled out a 2-1 win over Ikorodu United at the M.K.O Abiola Satdium on Sunday, to have one hand on the NPFL title.

The Flying Antelopes need just a point at home on Sunday to officially end their 32-year wait for silverware.

It will take Rangers losing at home by as much as four-goal margin, while Rivers United win away for the tables to turn round.

Fans have been told to don the white and red colours of Rangers when coming for Sunday’s game and should be in their best behaviour as they have been all through the season.

It is expected that the players will have a honorary lap of honour to express their sincerest gratitude to the fans for all the support through the season.

EDITORIAL: How Buhari Helped Nigeria Into Recession and How He Can Take Us Out Of It