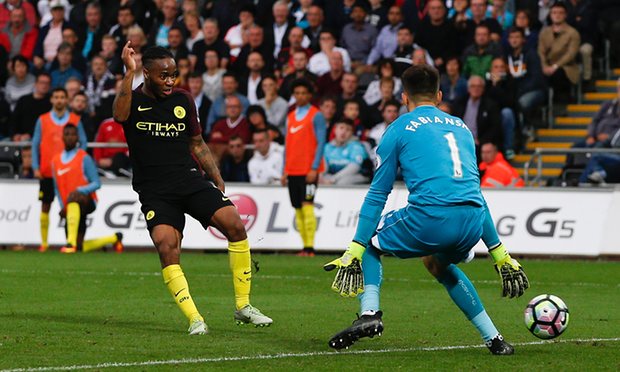 Manchester City are gradually pulling off the pack in the English Premier having opened a four-point gap at the top after their latest win on Saturday.

Coach Pep Guardiola’s side romped to their sixth win in the League and tenth in all competitions as they wiped Swansea City 3-1 at the Liberty Stadium in Southern Wales.

A brace from Sergio Aguero and another goal from Raheem Sterling meant there was no need to bring in Nigerian striker, Kelechi Iheanacho.

Last season, Iheanacho scored on both legs against the Swans.

In other games, Tottenham Hotspur jumped to second spot on the log after recording a 2-1 win away to Middlesbrough.

Spurs and City are the only teams yet to taste defeat this season.

At the Stadium of Light, Sunderland blew away a two-goal lead as they were beaten 2-3 by Crystal Palace.

David Moyes’ side remain rooted at the bottom of the log with just a solitary point after six games.

Liverpool on their part were ruthless at home as they spanked Hull City 5-1.

AFC Bournemouth got their second win of season as they edged Everton 1-0. The result ended the Toffees unbeaten run in the league.

Boko Haram not in control of any Nigerian territory, Army insists