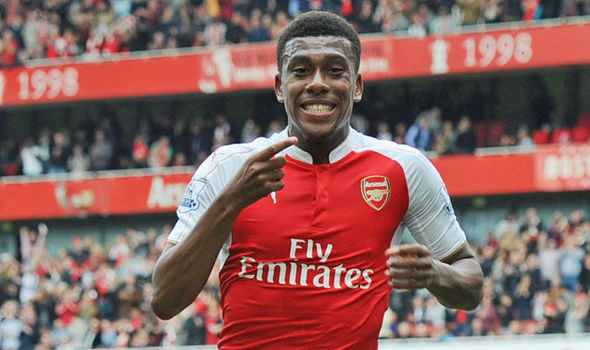 One Nigerian with the greatest prospect of playing a part in Saturday’s London Derby between Arsenal and Chelsea at the Emirates Stadium is Alex Iwobi.

Going into the derby clash, Iwobi has received special praises from the Arsenal Coach, Arsene Wenger, who gave reasons why the 20-year-old has suddenly become a regular with the Gunners’ first team.

Wenger, while speaking with Arsenal’s official website, said that among other things, Iwobi’s ability to connect with his team-mates and also analyse games were some of the reasons he decided to give the young Nigerian a chance.

“I knew when I took him in training a few times,” Wenger told arsenal.com.

“He is not the kind of player who impresses you at first. But when you look a bit deeper he is quick at connecting with other players.

Despite sustaining an injury against Liverpool, Iwobi has since returned to first-team action and provided two assists in Arsenal’s 4-1 win against Hull City last weekend.

For Wenger, Iwobi is doing quite good but can always get better.

“When you look at him at first there is nothing special there. But after when you look he is always connecting with others at a very high level and a very high pace. That’s why I think he is improving.

“He has still a lot of work to do but he has something that is very important at the top level. Speed and an understanding of the game,” the French coach who is in his 20th year with Arsenal submitted.

It is yet to be seen if the Nigerian duo of Victor Moses and John Obi Mikel will get a chance to contest against Iwobi in the final EPL fixture for Saturday.

The three players are however in the roster of 23 players invited by Nigeria for the 2018 World Cup qualifying match away to Zambia on October 9 in Ndola.

Falana wants EFCC to probe ‘diversion’ of state funds by Sanusi, Soludo, others