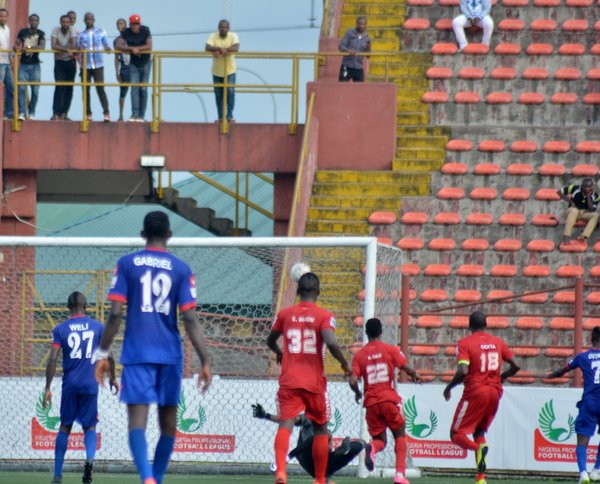 Rivers United are now top on the Nigeria Professional Football League table following their 3-1 win over Warri Wolves on Saturday at the Yakubu Gowon Stadium in Port Harcourt.

With this latest win, Rivers United have 56 points from 33 games as they have now opened a two-point gap at the top.

Enugu Rangers lost their number one position on the log to Rivers United as they were beaten 2-1 in Ibadan by Shooting Stars.

With three games still to go, the title is still wide open as FC Ifeanyi Ubah have also moved to third spot on the strength of their 2-0 win over Akwa United.

Goals from Pascal Seka in the 8th minute and another from Ismaila Gata in the second half was all that was needed by the big spenders to increase their points haul to 53 also from 33 games.

For many, the most surprising result came from Abeokuta, where relegation-haunted Ikorodu United pounded Kano Pillars 4-1.

Interestingly, it was Pillars that struck first through their play maker, Rabiu Ali, who rounded up Ikorodu GK Adamu, before squeezing the ball into the net from a tight angle.

That was how far it was good for Pillars as Ikorodu United seized the initiative from there as Onyelonu netted the equaliser for the home team just before the half time whistle was blown.

Muyiwa Lawal shot the hosts in front just two minutes after the restart before Paul Duke headed Ikorodu Utd further in front in the 70th minute.

The bad day for Pillars got worse as Onyelonu completed his brace to make scores 4-1.

Pillars had the chance to reduce the deficit as they won a late penalty but Rabiu Ali who stepped out to take the resultant kick fluffed it.

While the win for Ikorodu United cannot take them off the bottom of the log, the loss for Pillars will adversely affect their chances of making it to the Continent next season.

Meanwhile, the heavy downpour in Lagos as forced the MFM FC Vs Lobi Stars clash to be moved to Sunday morning.