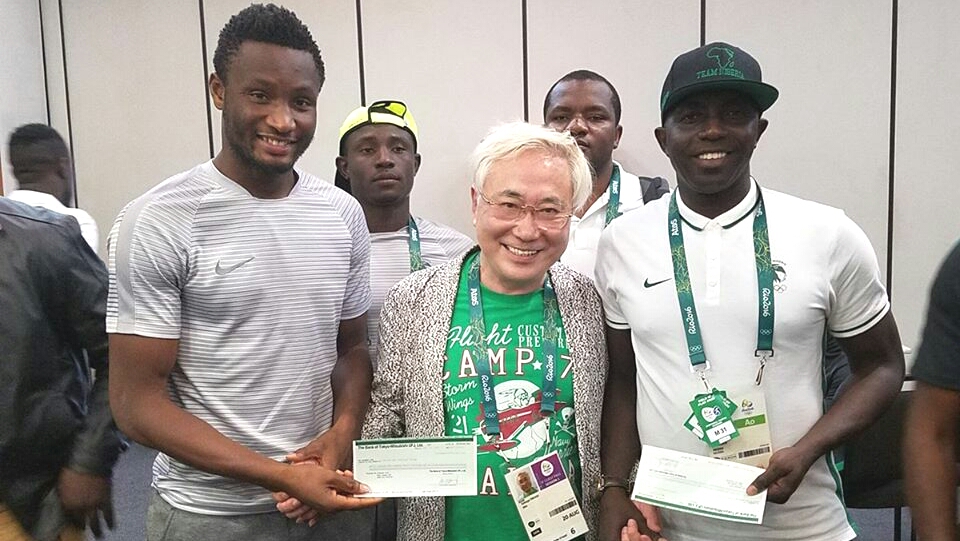 The dust raised by the donation from a Japanese doctor, Katsuya Takasu, to the Nigeria U-23 team for their exploit at the Rio Olympics may have been finally settled.

That indication emerged following the circulation of a picture of the Japanese doctor handing cheques to the duo of Mikel Obi, who is the captain of the team, as well as the Head Coach Samson Siasia.

Earlier on Saturday, a former Super Eagles goalkeeper and football analyst, Peterside Idah, had raised the alarm that Nigeria Football Federation officials had hijacked the donation made by the Japanese doctor.

The NFF denied the allegation.

Mr.Idah later confirmed that Mr. Takasu had made the donation directly to the beneficiaries at their hotel.

“All is well,” Mr Idah tweeted. “Two cheques have just been handed over to the team. One in Samson Siasia’s name, and the other made out to the name of Mikel.”

In an earlier interview, Mr. Takasu said he made the donation to the players after hearing about their financial crisis.

“I read about the financial problems affecting the team and I felt the need to make a big contribution,” Mr. Takasu told the BBC earlier this week.

The Nigeria U-23 have hugged the headlines on and off the pitch as they braved all odds to make a podium finish at the Olympics.

Continually referred to as ‘miracle workers’ by their coach, the Dream Team VI surprised many with their performance in the face of daunting challenges which included arriving barely hours to their first match in Rio.

The 3-2 win over Honduras on Saturday ensured that Nigeria won its first medal since after the Beijing 2008 Olympics.

Oyegun to PDP: Shut up, you left Nigeria in bad shape