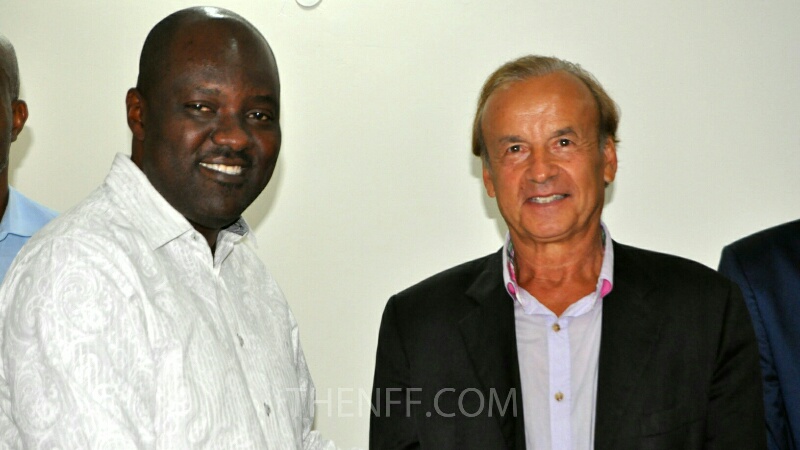 The Technical and Development Committee of Nigeria Football Federation has recommended to the Executive Board the candidature of Mr. Gernot Rohr for appointment as Technical Adviser of the Super Eagles.

Ahmed Yusuf Fresh, vice chairman of the committee, told thenff.com that the team was convinced of the former German defender’s suitability for the job after a long session with him in Abuja on Saturday.

“The committee was impressed with Mr. Rohr’s profile and current activities for the German Football Federation (DFB), so we invited him to Nigeria for exhaustive deliberations.

“He was very positive, showed great interest in the job and is ready and willing to live in Nigeria. He is also willing to work with indigenous Nigerian coaches and with the committee, and believes the Super Eagles can qualify for the 2018 FIFA World Cup, which is very important to the NFF. He swayed the committee with his calmness, good knowledge of the African terrain, focus and maturity.”

Rohr, 63, played for FC Girondins Bordeaux in France as a defender and as coach, took the team to the UEFA Cup final in 1996 before they lost to Bayern Munich of Germany. He also coached top Tunisian club, Etoile du Sahel and FC Nantes before managing the National Teams of Gabon, Niger Republic and Burkina Faso. He was shortlisted for the job of Head Coach of Guinea only last month.

“Mr. Rohr has the character and confidence to take the Super Eagles to new heights of excellence. He has rich knowledge of both sub-Saharan and North African terrains and truly impressed the committee.

“Our job is to recommend him to the Board, which we have done. The NFF legal department is working on the final draft of the contract but we have agreed on a range of terms and conditions.

“The Secretariat will present the full contract to Mr. Rohr in the following days and the Executive Board will contact Mr. Rohr for the final negotiations,” said Fresh.

SERAP to Dogara: Resign now, budget padding is a crime