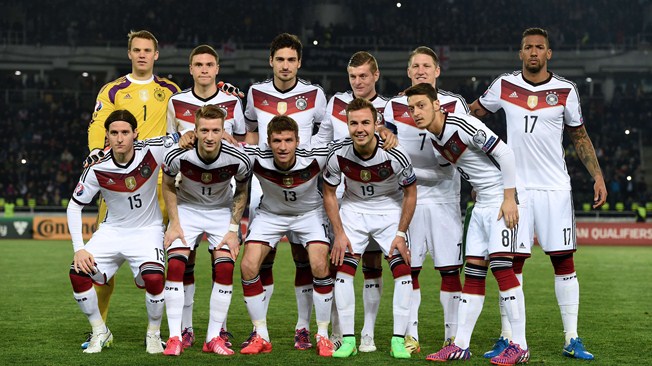 Euro 2016: Germany through to semi final after dramatic win over Italy

Germany are through to the semi-final of the Euro 2016 championships after a dramatic 6-5 win over Italy on Saturday night in Bordeaux, France.

Both team played 1-1 in regulation period and had to settle scores via penalty kicks.

Though the game started predictably on a cautious note for both teams, the dramatic quarter-final clash sparked to life right from the first half when Germany had a goal disallowed and Italy failed to take a double chance on the stroke of half-time.

A common line in the mouth of commentators going into Saturday’s game was that Germany had never beaten the Azzurri in a major tournament, earning four draws and as many defeats.

Expectedly, the world champions were keen to break that jinx as they went into the quarter-final in Bordeaux feeling confident as World Cup holders.

Sadly, soon as the Germans were getting into their element, their Juventus midfielder, Sami Khedira, was forced off with a muscular problem, to be replaced by Bastian Schweinsteiger.

Mario Gomez at full stretch couldn’t control the Mats Hummels cross and Schweinsteiger had the ball in the net on 26 minutes, but only after the whistle had blown for his blatant shove on Mattia De Sciglio.

Gomez also nodded a Joshua Kimmich cross over the bar and the Germans scuffed three shots in the same move, Buffon eventually gathering from Thomas Müller.

However, just before half time there was a splendid double chance for Italy. Neuer’s foot first prevented Eder tapping in from seven yards, then Sturaro’s follow-up was deflected just wide by Boateng.

In the second half, both teams continued from where they stopped pushing hard for the curtain raiser.

And finally it was the Germans that had the first laugh with Mesut Ozil choosing the perfect time to open his goal-scoring account at the ongoing Euro 2016 Champions, putting the World Cup holders in front in the 65th minute.

However, the Italians were given a easy route to equalise when Jerome Boateng handled the ball in box and the resultant penalty kick awarded was well converted by defender Bonucci who confidently stepped up and buried into the bottom corner to level the score in the 78th minute.

Both sides held their cool till the second half ended and all through the 30 minutes extra time. In the penalty shoot outs, Germany, finished tops after nine kicks each and will now face the winner of Sunday’s last quarter final match between hosts, France, and giant killers Iceland, in the semi finals.