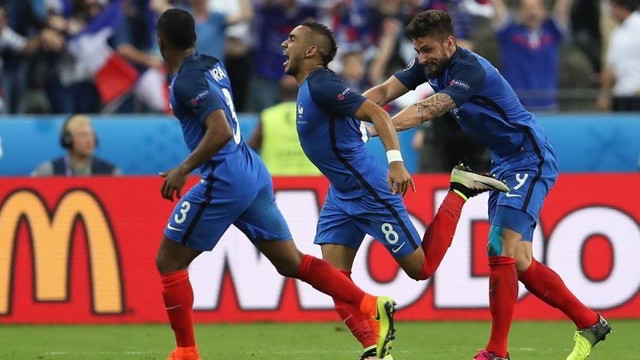 The teeming French fans at the Stade de France had to wait 87 minutes for the winner from their team against Romania on the opening night of Euro 2016.

And the winner on Friday night was the game’s standout player, Dmitri Payet.

The opening ceremony was very colourful and must have got every fan in the mood for an enthralling opening to Euro 2016 but the first half between France and Romania was anything but.

France, at FIFA ranking of 18, failed to blow away their Eastern European opponents.

Romania’s Bogdan Stancu missed an open goal with just Hugo Lloris between him and the net but the Tottenham goalkeeper moved his feet quickly to make a terrific save.

France went on the offensive as Dmitri Payet sent in a fine cross but Olivier Giroud headed wide when he had more time to make a better decision.

The clearest chance of the half for France came in the 13th minute when Paul Pogba pass opened up the Romanian defence. Bacary Sagna then sent in a pinpoint cross towards Antoine Griezmann – he missed the first chance but on the second, he headed against the post.

Les Bleus had now settled and Vlad Chiriches got the game’s first yellow card on 31 minutes. Five minutes later, Griezmann could have opened scores but a timely deflection from Cristian Sapanaru took the ball wide. The referee, did not see the deflection and did not give a corner kick.

Romania believed they should have been awarded a penalty seven minutes to the end of the half when Florin Andone went down in the box. Replays showed that Laurent Koscielny had made contact with the forward but the referee was blindside in the action.

The half ended with Giroud powered a header over the bar after a wrestling match with Chiriches.

The second half started with Romania on the front foot and agan Stancu had the chance to put his team in front. But after beating the offside and a chest trap, he rushed his volley wide. France seemed to be in a stutter and suffering from first day nerves and Anghel Iordanescu’s team sensed the opportunity.

There was an instant riposte from France as Payet found Giroud in the box but the Arsenal forward’s shot was tame and easy for Ciprian Tatarusanu.

But the pressure was on and from France’s next wave of attack, Payet produced a cross – from which Giroud got the better of Tatarusanu, who ostensibly pulled out of contact expecting a whistle that did not materialize.

And what a goal it was – a blast from his left foot on the edge of the box and tears of joy when he was taken off in added time. Payet had finally delivered on his talent – made the opener for Olivier Giroud.

But that enthusiasm of that opening goal was quickly dampened six minutes afterwards as referee, Viktor Kassai penalised Patrice Evra’s reckless trip on Bogdan Stancu. Stancu dusted himself off to send Hugo Lloris the wrong way.

France pressed but the crowd went aghast when France’s golden boy, Pogba was taken off on 76 minutes. The best was then saved for last as Payet blasted in a goal of the tournament contender to edge France a needed win.

Respected Spanish pundit, Guillem Balague ‏commented on Twitter that France’s challenge for the tournament would be their rigidity as only Payet played between the lines and surprised and he commended the Romanians for putting up a wonderful defensive system.