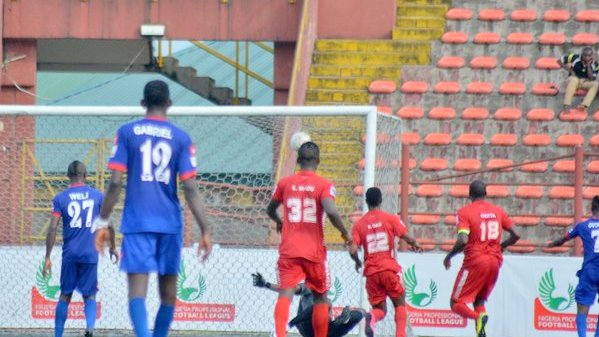 While Rivers United got their win at home, Wikki had it harder travelling to Lagos to beat bottom side Ikorodu United.

Weli headed home Chiwendu Ali’s corner kick for the game’s only goal past a despairing Lobi goal keeper, Okiemute Odah, who had been in impressive form until that moment.

The win meant United stayed level on points with the leaders, Wikki Tourists, who beat Ikorodu United 1-0 in Lagos to stay top on goals difference.

The Bauchi club struck their hosts quite late, as the winning goal came five minutes from time off a killer punch from Idris Guda.

In other games, Coach Gbenga Ogunbote gave Ibadan fans a lot to cheer as he marked his return to Shooting Stars with a comprehensive 3-0 win over Akwa United.

At the Dan Ayiam Stadium, Rangers returned to winning ways as they downed their fierce rivals, Heartland FC 2-1 away from home.

Elsewhere, Ifeanyi Matthew was the hero for Kano Pillars as he scored the winner against Plateau United in the game played at the Sani Abacha Stadium.