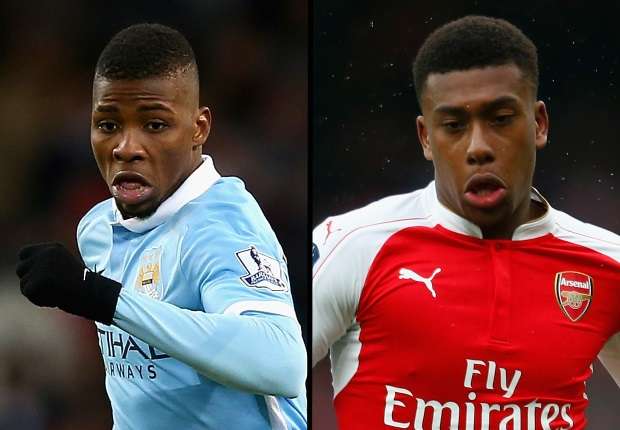 Kelechi Iheanacho and Alex Iwobi were handed starting roles as Manchester City and Arsenal played out a 2-2 draw at the Etihad on Sunday.

Iwobi, who was making his seventh start for Arsenal, was on parade for 59 minutes of the Etihad showdown. In Manchester, Iheanacho failed to score for the first time in his last three league appearances for the Citizens after bagging 70 minutes of action during his sixth start of the 2015/16 EPL campaign.

In what was primarily the fight for who takes the final automatic champions league spot in England, it was Sergio Aguero that opened the scoring for the hosts; but the Gunners hit back within two minutes through Olivier Giroud’s powerful header.

A fantastic solo run from Kevin De Bruyne six minutes after the break resulted in Manchester City’s second but Arsenal were back on level terms as Alexis Sanchez got the equalizer nine minutes after the hour-mark at 2-2.

At Anfield, it was another disappointing outing for Nigerian striker Odion Ighalo as his goals drought extended to 12 games in the 2-0 loss to high-flying Liverpool.

Goals from Joe Allen in the 35th minute and Roberto Firmino in the 76th minute was enough to give the Reds all three points and 8th spot on the log.

In the day’s earlier game, Tottenham Hotspur have lost steam with the title already conceded to Leicester and it was not surprising for many to see them go down 2-1 at home to Southampton who are eyeing one of the Europa League spots and are now 6th on the EPL standings.