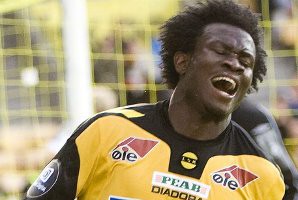 The Super Eagles midfielder, Nosa Igiebor, is through to the Group phase of the UEFA Champions League as his Israeli club, Maccabi Hafia, on Tuesday night played at a nervy 1-1 draw with Swiss side FC Basel.

Maccabi having secured a 2-2 draw in the first leg pulled through via the away goals rule as both teams were tied on three goals apiece.

It was Basel that drew the first blood in Tuesday night’s second leg playoff tie as Luca Zuffi netted the opener just 11 minutes into the game.

Eran Zahavi who was the hero in the first leg came to Maccabi’s rescue yet again -as he banged in the equaliser on the night in the 24th minute.

From then, both teams huffed and puffed but there were no more goals. Igiebor was on the pitch for 70 minutes but also fired blanks.

Despite that, Maccabi pulled through and would now wait to be paired along Europe’s top team in the Group phase

It was, however, a different kettle of fish for Igiebor’s compatriot at the Louis stadium in France, as Elerson Echiejile and his Monaco teammates lost 4-3 on aggregate to Valencia despite defeating the Spanish side 2-1 in the second leg.

Echiejile was booked in the 68th minute before latching on to a Bernard’s cross to score in the 75th minute of the encounter.

For Echiejile it was his 15th appearance in the competition.

Ambrose was an unused substitute in the defeat