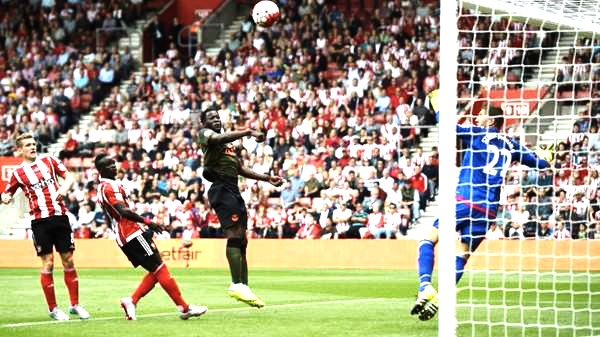 With Manchester United up on the summit with six points out of six, the Saturday fixtures continued the trend of away wins with Leicester taking that unlikely position after a 2-1 win away to West Ham, who had sparkled on opening day win away to Arsenal.

Everton started off with a sparkling 3-0 away win over Southampton, with a double from Romelu Lukaku.

The first goal was a class in setting up a counter attack as from a Southampton corner kick, the Toffees broke up the pitch and 18 seconds after that corner, Lukasz Fabianski was picking the ball from the back of his net from a Lukaku header.

That was on 22 minutes and Lukaku doubled his tally for the match and for the season with another breakaway goal.

The Belgian won the ball in midfield and fed Ross Barkley who returned the favour and Lukaku shot past Fabianski.

Everton got the icing on the cake with Barkley scoring a peach with six minutes left on the clock.

Norwich put Sunderland to the sword with three goals and it was the perfect response after losing at home last week to Aston Villa.

But with this display, the Black Cats, having conceded seven goals in two matches already look like relegation candidates.

Tottenham lost a two-goal lead, which they had in the first half and were pegged back by Stoke who introduced Stephen Ireland and Joselu for Marco van Ginkel and Jonathan Walters. Marko Arnautovic scored from the penalty spot in the 78th minute and equalised in the 83rd through Mame Biram Diouf.

So on the second week of the Barclays Premier League, Riyad Mahrez leads the goal scoring table with three in two games with Saturday and Friday witnessing four away wins out of seven matches.