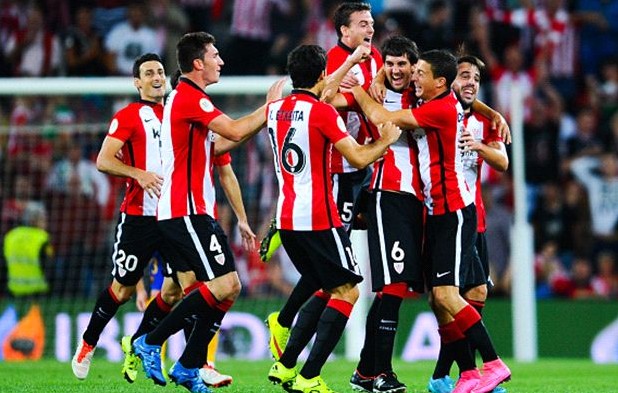 In driving rain at San Mames, Barcelona were brought crashing to earth as they conceded four goals after the four against Sevilla in the UEFA Super Cup last Tuesday.

But this time, in a pulsating battle for the Spanish Super Cup, they could not score five as they did to lift the Super Cup.

So 31 years after they last won a trophy, Atletic Bilbao stand on the cusp of another one, and this time against Barcelona, who were looking for the sextuple.

But the first 10 minutes of the encounter did not give any indication that the night would be rough for the Champions League winners.

And the questions will come thick and fast for Luis Enrique who decided to start with a slightly weakened team with starting berths for Bartra and Vermaelen. Pedro, who scored the winning goal against Sevilla, also started, with news swirling that both Manchester United and Manchester City have both made offers for the wide forward.

Bilbao were chasing shadows for the first five minutes but they got the first goal after Andre Ter-Stegen shanked a pass with his head and Ter Stegen comes off his line to head clear, and Mikel San Jose hit the shot from the halfway line and the crowd at San Mames heaved.

After that shoddy goal, Barcelona lost their way and it must be said that playing 120 minutes in Tbilisi on Tuesday and the constant hassling of the Bilbao players,Lionel Messi could not get into the game and Luis Suarez was feeding on scraps.

But the Uruguayan had a chance 29 minutes into the game but after going past Gorka Iraizoz, in goal for Bilbao, but he could not squeeze his shot in from a tight angle.

Javier Mascherano, playing in the Sergio Busquets’ role was always complaining but the first half ended with the home side in the lead and with wind in their sails.

The second half may never be repeated and it started well for the Catalans as Pedro smashed a ball against the underside of the bar six minutes into the second half.

But after that it was the Aritz Aduriz, who claimed the match ball with goals in the 53rd, 62nd and 68th minutes.

Sabin crossed for Aduriz to get his first goal,followed by calamitous defending in the box by Diego Alves and Aduriz shot past Ter Stegen.

He completed his hattrick with a penalty after Alves committed a rash challenge in the box during a corner kick.

He drove the ball hard and low to Ter Stegen’s right with the goalkeeper going in the opposite direction.

The humiliation was complete, as Aduriz became the first player to score three goals against Barcelona since 2005.

The second leg is at the Nou Camp on Monday and coincidentally Barcelona start their 2015/16 La Liga campaign next Saturday at the San Mames.