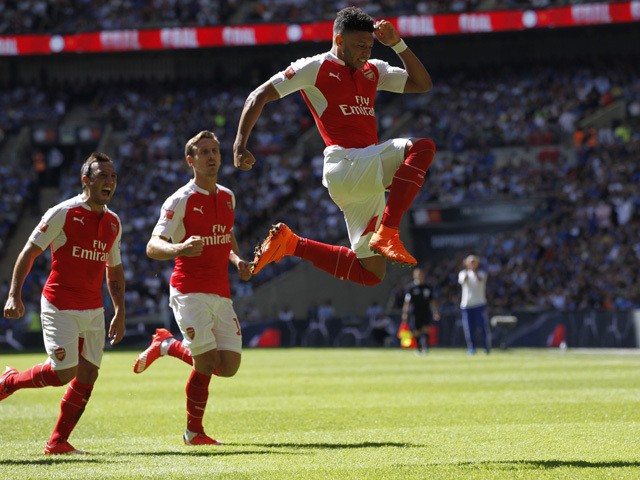 Arsenal on Sunday emerged as winners of the 2015 Community Shield as they defeated London rivals, Chelsea, by a lone goal.

Sunday’s win over Chelsea at the Wembley Stadium was the first for Coach Arsene Wenger who has failed in earlier 13 attempts at beating his fierce rival, Jose Mourinho.

A  left-footed strike from Alex Oxlade-Chamberlain in the 24th minute proved adequate to give the back-to-back FA Cup champions the 2015 Community Shield.

Thibuart  Courtois was unable to stop Oxlade-Chamberlain from breaking the deadlock after initially making some saves.

Ozil and Walcott were both instrumental in the build up for the only goal scored by Arsenal when the ball was played out towards the right side of the penalty area for Oxlade-Chamberlain.

The England midfielder kept his cool, then took off Cesar Azpilicueta, and he lashed a rising shot into the top left hand corner of the net.

Chelsea tried from then to see if they could change things but they failed as Arsenal ran away with the slim victory to win their 14th Community Shield title.

While Nigeria’s Victor Moses came in for a cameo appearance to see if he could turn things around for the Blues, his compatriot John Obi Mikel, was left rooted to the bench.

It was gathered that the new Super Eagles Coach, Sunday Oliseh, and the NFF President Amaju Pinnick were among the dignitaries at the Wembley Stadium for Sunday’s game.