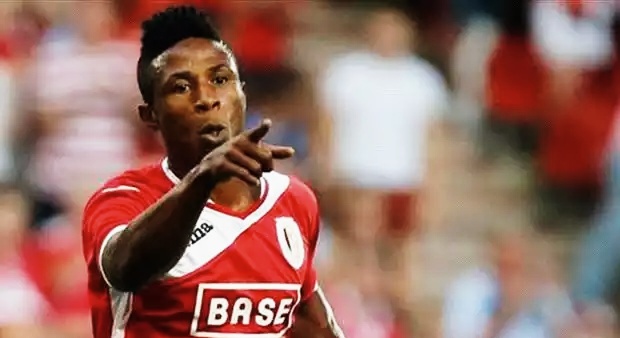 Single-cap Nigerian forward, Imoh Ezekiel, was unveiled as an Anderlecht player on Wednesday.

His manager, Gafar Liameed, described the move as good for the player and for Nigeria.

Anderlecht sold Aleksandar Mitrovic to Newcastle for about 18 million Euro but moved swiftly in the transfer window to bring in a replacement in the Nigerian.

Ezekiel has played in Belgium since 2012, except for a six-month spell with Qatari club, Al Arabi in 2014.

Liameed told PREMIUM TIMES that his ward made the right decision in the end as two Russian sides, Locomotiv Moscow, and Dinamo Moscow, offered more money for the striker.

“It is a good move for Imoh and Nigeria in the end,” Liameed said. “My Belgian partner, Michele Saggase, and I advised him that it was better for his career to continue in Belgium – a place he is already familiar with and where he is already a relative success.”

Imoh played 93 league games for Standard Liege, including half of last season and scored 35 goals – helping them to the league title in the 2013/14 season.

Liameed also explained that Imoh is on loan from Al Arabi, who still owns his contract.

“I went to Qatar like thrice to see him playing for Al Arabi, and even though the league is thriving, it is not on the same level with that of Belgium,” Liammed said. “So we advised him that at his age and for his career, he needed to come back to mainland Europe.

“He heeded that advise and that is why he spent the second half of last season with Standard, who wanted him to extend the loan deal but were not able to match Anderlecht’s offer.”

The 21-year old is also expected to be part of the Samson Siasia-led U-23 national team. He told his new club’s website that he joined to win titles.

“I hope we can do that this season and that we can qualify for the Champions League. I hope to help with that by scoring a lot of goals.”

Permanent Secretaries in trouble over non-declaration of assets