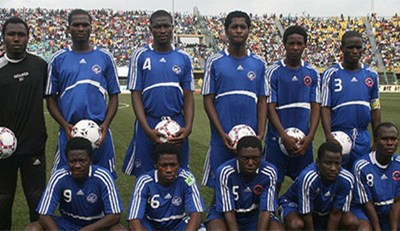 Sharks FC have jumped two places up from the bottom spot they previously occupied following their 0-1 victory over Kwara United in one of the Week 17 Nigeria Premier League games played across the country on Sunday.

The away win in Ilorin is the only one recorded in this weekend’s round of matches as the Blue Angels secure a massive boost in their survival quest in the elite division.

Christian Pyagbara shocked home fans at the Ilorin Township Stadium with his 24th minute strike and all attempts by the Afonja Warriors to get back into the game failed.
With the victory, Sharks are now 18th on the log with 15 points from 17 games, while it is not looking any good for Kwara United who are 17th on the log with 16 points albeit with a game at hand.

In other games, Sunshine Stars consolidated on their number one position on the log as they conveniently defeated Bayelsa United 2-0 at the Akure Township Stadium.
Goals from Kingsley Eduwo and Tunde Adeniji ensured that the Akure Gunners will remain at the summit of the League table for at least another week. Sunshine have 33 points 17 games.

For Enyimba and Kano Pillars who were knocked out of the Federation Cup in the Round 32 games recently played, there was nothing to cheer again as they both suffered away defeats in their games against Warri Wolves and Akwa United.

While Enyimba were defeated 2-1, Pillars lost 1-0 at the Nest of Champions in Uyo.

Meanwhile in Ibadan, Shooting Stars were simply unstoppable as they thrashed visiting Giwa FC 3-0.
Ibarahim Ajani netted a brace for the Coach Gbenga Ogbunbote-tutored side while Nojeem Olukokun completed the first half routing of the Jos-based team.