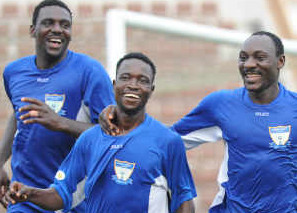 Sunshine Stars of Akure now enjoy a two-point gap at the summit of the Nigeria Premier League following their 3-0 bashing of Kano Pillars on Sunday at the Akure Township Stadium.

The Akure Gunners at the end of Week 12 only had a point advantage over their then closest rival; Enyimba, but they now have more breathing space with the big win over Pillars having increased their points tally to 26 after 13 games.

Paul Onobi, Dayo Ojo and Olulayo were the scorers as Sunshine Stars took the defending champions to the cleaners.

Wikki Tourists have now jumped to second spot with 24 points having drowned Sharks FC 3-0 in Bauchi.

There was also plenty to cheer for away teams who secured wins and draws in five of the ten fixtures played on Sunday.

Ifeanyi Ubah FC produced the best result of the weekend as they went away and thrashed El-Kanemi 4-1. There was also another away fixture in Warri where Enugu Rangers secured a lone goal win over their hosts Warri Wolves.

In Port Harcourt, Giwa FC forced Dolphins FC to a 1-1 draw while Enyimba extended their unbeaten run to six games following their 0-0 draw in Ibadan against Shooting Stars.

Keshi did not apply for Ivory Coast job, agent says