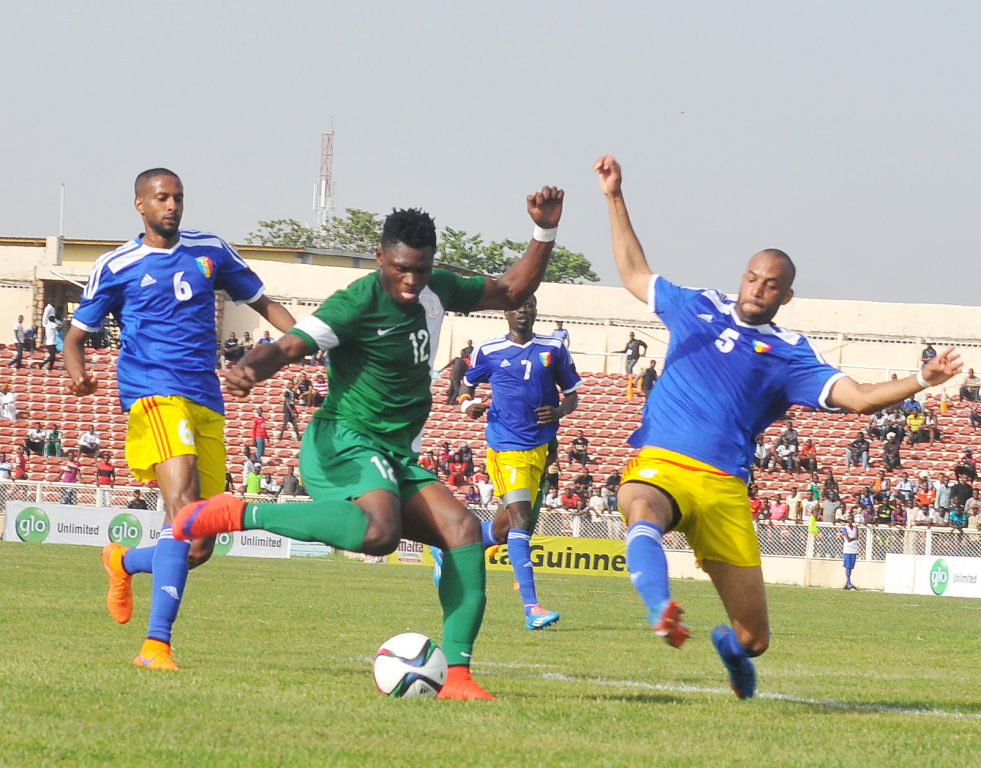 The Nigeria Super Eagles on Saturday kick-started their quest for qualification for the 2017 Africa Cup of Nations on a winning note as they secured a 2-0 win over Chadian National team at the Ahmadu Bello Stadium in Kaduna.

Gbolahan Salami and Odion Ighalo were the goalscorers for the Nigerian team which ended the match with 10-men after defensive midfielder, Ogenyi Onazi, was shown a red card for retaliation.

In Saturday’s outing, the Chad team, ranked over 100 places below Nigeria on the monthly FIFA rankings, showed no sign of being underdogs as they matched the three-time African champions pound for pound.

The visitors indeed had the better chances in the first half which ended goalless but Nigeria had the last laugh in the second half.

Ten minutes into the second half, the Super Eagles were awarded a free kick just outside the box of the Chadians and Aaron Samuel delivered a nice curler which agonizingly hit the bar.

The Chad team were by no means shaken by this as they even pressed further in their quest to cause an upset against the Super Eagles.

Coach Stephen Keshi knowing the weight of expectation on him opted to make two quick substitutions as he brought in Rabiu Ibrahim and then Odion Ighalo to replace the duo of Babatunde Michael and Aaron Samuel who was feared to have cupped a hamstring.

The new additions turned out valuable as Nigeria shot into the lead 19 minutes into the second half when new entrant Ighalo found Gbolahan Salami who rocketed the ball into the roof of the net to finally calm frail nerves of the fans at the Ahamdu Bello Stadium and gave Nigeria the lead.

The goal further served as a morale booster for the Nigeria team who were quickly looking to doubling their lead and by extension kill the game.


Salami was close to hitting another goal in the 77th minute but after dribbling his marker, his shot was saved by the Chadian goal keeper.

Nigeria’s second goal finally came in the 81stminute when Ighalo was brought down in the penalty box and he stood up to take the result kick which he calmly converted.

The second goal exposed the security lapses at the Kaduna stadium as some fans found their way to the pitch to celebrate with the Eagles.

With the match ending 2-0, the Eagles will hope they can continue in that light in subsequent games as they will want to be in Gabon 2017.