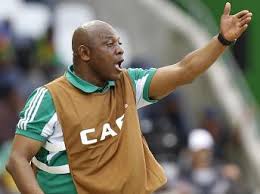 He made the demand during the team’s media briefing in Abuja, pleading with the Nigeria Football Association to provide it before the match scheduled to take place in Kaduna.

“I can only remember how they use to play in the past and I know that the team will be made up of most of their foreign-based players,” he said. “We don’t have any reason to underrate Chad; we are preparing very seriously just like we could do if we are to confront Brazil, France or any other country in the world.

“Football is not what it used to be in the past when some team or country is seen as underdogs. I have been hearing the comment some people are making that we can use, league players to play Chad. That’s not true because I played against Chad when I was with Mali and they are strong. Most of their players are foreign-based.”

He said his players were adapting to training, adding that the team was motivated to confront Chad having missed out in the last AFCON.

He said the Super Eagles would leave nothing to chance in ensuring that they qualified for the AFCON 2017.

The Super Eagles handler expressed confidence in the ability of the newly invited players, noting that the technical crew has been monitoring them in the last two years.

On the preference of more foreign-based players for the encounter, the coach said the coaching crew decided to engage the best legs ahead of Chad clash whether home or foreign-based.

Keshi pointed out that there were potential in the domestic players but regretted that he did not have enough time to train with them.

“With the quality of players we have playing at home, we can build a very strong team that can beat Chad or any other country,” he said. “For me, coaching the home-based players to play against Chad will be a little bit difficult.

“The thing again is that we can take all 23 home-based players to play against Chad, but the same Nigerians will say this man is crazy. How can he play with only local boys; what happened to the foreign-based players?

“If we bring in professional players, people will still complain. The bottom line is that we have to do what we have to do to make things go right. This is because all we care about is the three points and how we will get to Gabon come 2017 is the ultimate.”

Keshi also said that the absence of Mikel Obi from the team did not mean he had problem with him.

He noted that Mikel was not needed at the moment but could make the team in the next qualifying match in September.

FIFA U20 World Cup: Nigeria defeat Hungary, to face Germany in Round of 16