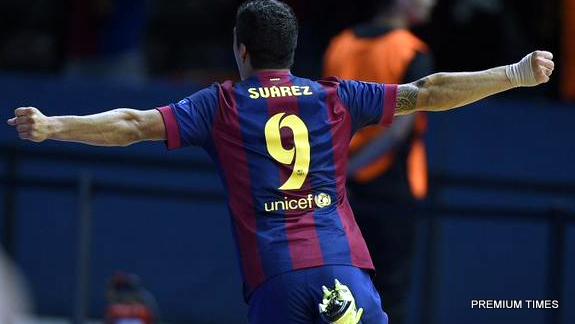 Spanish Club Barcelona have emerged the winner​s​ of the 2015 UEFA Champions League following their 3-1 win over Juventus in Berlin’s Olympiastadion on Saturday night.

Goals from Luis Suarez and later on from Neymar saw Barcelona edge out Juventus who had earlier fell to a 4th minute strike from Rakatic.

Rakitic gave the Catalan giants the early lead with bar​e​ly four minutes of action​,​ and while Alvaro Morata did get an equaliser later on in the second half for the Old Lady, Suarez who had been denied on a number of occasions by Buffon finally registered his name on the scorer’s sheet in the 68th minute.

While Neymar was first denied a chance of giving Barcelona a third goal on the night, the Brazilian still made his presence count with a goal deep into stoppage time to end the game 3-1

The win sees Luis Enrique’s men going on to complete their treble chase having won the La Liga and Copa del Rey earlier.
​​
The victory in Berlin sees Barca effectively add another Champions League trophy to their spilling cabine​t.​

Barcelona are now the first team in history to complete the treble on two separate occasion​.​