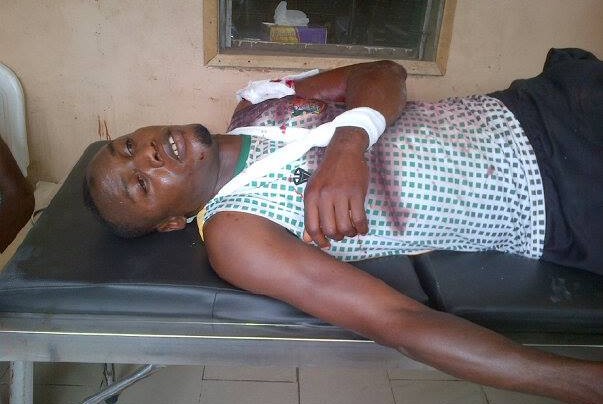 Gunshot wounds sustained by one of the Kano Pillars Players

Players and officials of Nigeria Premier League side, Kano Pillars, have aborted their trip to Owerri in Imo State for their weekend game against Heartland FC, after they were attacked by armed robbers on Thursday afternoon in Abaji, a suburb of Abuja.

One of those mostly affected in the incidence is striker Gambo Mohammed who was shot on his shoulders.

Confirming the incident to PREMIUM TIMES, Idris Malikawa, who is the media officer for the reigning Nigeria League champions, said unknown gunmen attacked the bus conveying the players at about 1.pm Thursday afternoon.

“We are now in Lokoja attending to our players and officials who suffered varying degrees of wound after the bus we were traveling with was attack by armed robbers in Abaji today,” he said.

Asked if the team will still go ahead to honour the Week 1 tie against the Naze Millionaires, Mr. Malikawa said they were only bothered about the safety and wellbeing of their injured players who are now receiving treatment in Lokoja.

“Please I can’t say anything about match, we are talking of the life of our players, when we have sorted that we will talk about match,” the Kano Pillars spokesperson told PREMIUM TIMES.

Pillars are the reigning champions of the Nigeria League after completing a hat trick of wins last season.
The Kano based club is representing Nigeria in the CAF Champions League where they are through to the next round having recorded wins over South Sudan side Al Malaika.