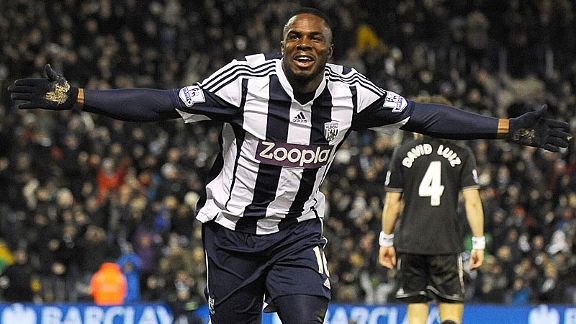 Nigerian striker Victor Anichebe was amongst the goal scorers as West Brom pounded non-League side Gateshead 7-0 in their FA Cup Third Round Clash on Saturday.

The victory for the Baggies was their biggest FA Cup win since November 1992 when they beat Aylesbury United 8-0 in the Cup competition.

Anichebe scored what was West Brom’s second goal of the day after Saido Berahino had opened the flood gate of goals at the Hawthorns.

The FA Cup clash saw Anichebe announcing his return to action in a big way for West Brom as a groin injury had hitherto denied the Nigerian striker playing time but having gotten the nod from the new Baggies Boss, Tony Pulis, Anichebe showed just how good he was when he got on to the end of a Berahino through ball and then smashed the ball past Bartlett to end the first half 2-0 for the hosts.

While Anichebe come back goal is heartwarming, Berahino’s double brace will be the talking point for many in the coming days.

Elsewhere, there was joy for another Nigerian player Kenneth Omeruo as his team Middlesbrough secured a 2-0 away win over Barnsley to secure passage to the phase of the FA Cup. Omeruo was handed a starter’s shirt in the tough encounter.

At the Den, Danny Shittu and his Millwall teammates gave a brave fight to force a replay with Bradford after ending their tie three goals apiece.

Swansea recorded a 2-6 over Tramere in other day’s high scoring match.
Action will continue on Sunday in the FA Cup with the likes of Mikel Obi and Sone Aluko likely to feature for their respective teams Chelsea and Hull City.