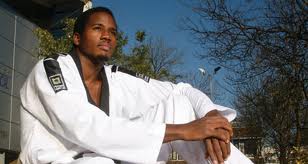 Chika Chukwumerije no longer in contention for gold

Olympics: Chukwumerije out of contention for taekwondo gold medal

Chika Chukwumerije on Saturday at the 2012 Olympic Games in London lost in the race for the gold medal in the men’s +80 kg fight in the taekwondo event.

He lost 0-1 to Cuba’s Robelis Despaigne through an offensive point his opponent gained after about 90 seconds in the third and final period of their fight.

Both fighters in the contest at the Excel-South Arena 1 had failed to secure any point in the first two periods of their fight.

The preliminary round fight was looking deadlocked before the Cuban, who was the event’s number four seed, struck.

However, Chukwumerije is still in with a chance of getting a bronze medal in the event through the `repechage’.

In each weight category of the sport, the competition consists of a single elimination tournament.

The winners of each contest qualify for the next round, with the two finalists going head-to-head in the gold medal contest.

But all competitors who lose to one of the finalists at any stage of the competition will enter the repechage.

If Despaigne is able to enter the final in fights slated for later in the day, Chukwumerije would then be fighting for a bronze medal in the repechage

The 28-year-old Nigerian was a bronze medallist in the event at the 2008 Olympic Games in Beijing, China.