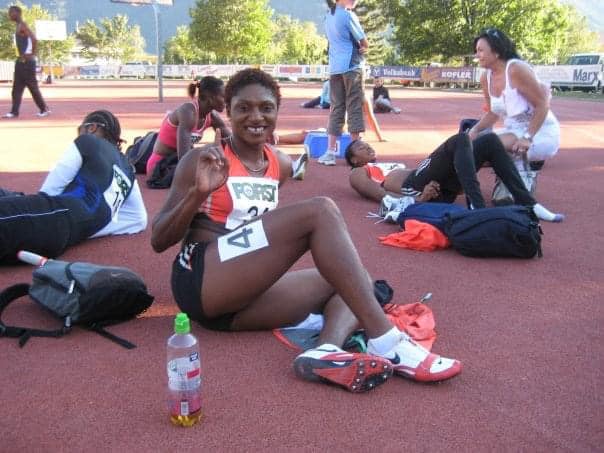 Franca as an athlete

Get us our silver medals, Franca Idoko-Isaac cries out to the NOC

The five-year wait is becoming unbearable for the ex-sprinter and her colleagues.

It was in the autumn of October 2007 and Jamaican and world-famous athlete Merlene Ottey had retired to bed after her busy schedule in Ljubljana, Slovenian capital. She pondered on how she had left the Sydney Olympics with no medal in the 100m.

To her, it was to be her parting shot from the sport that had brought her fame and wealth, but alas; she came fourth in the 100m.

But they say miracles happen in Ljubljana, Ottey never saw it coming. She woke up to bittersweet news of Marion Jones doping confession. Jones confessed to taking performance-enhancing drugs and had lied to the Federal jury about her involvement in drugs.

That meant an upgrade for Ottey to the bronze medal behind Greece’s Aikaterini Thanou and Jamaican Tayna Lawrence who were both upgraded to gold and silver, respectively.

By November that year, IOC stripped Jones of her five Olympics medals while Thanou, Tanya, and Ottey all received their upgraded medals. Ottey’s joy knew no bounds as she celebrated the cheering news with her family in her adopted country of Slovenia. 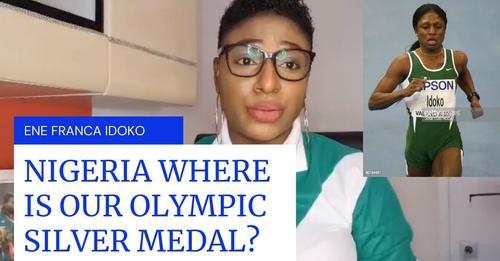 Ottey’s story is the direct opposite of Nigeria’s Franca Idoko-Isaac.

Idoko-Isaac’s initial joy, which came with the announcement of an upgrade to a silver medal in the 4x100m women’s relay event of the Beijing 2008 Olympic Games, has turned sour.

Five years after the pronouncement, the 4x100m relay team is yet to get their hands on their upgraded medals.

In almost 70 years of competing at the Olympic Games, Nigeria has never won the silver medal in the 4x100m women’s relay meaning; Franca Idoko, Gloria Kemasuode, Halimat Ismaila, Oludamola Osayomi are trailblazers that are unfairly being denied their legendary status.

The unfortunate development pains Idoko-Isaac, a major actor in that race and she is calling out the Nigeria Olympic Committee (NOC) to do what is needed; especially as they are in Tokyo where the International Olympic Committee and other relevant bodies will be readily available to sort out any ‘grey’ areas.

Idoko-Isaac, in a video posted on her Facebook page, wonders why the NOC is failing in one of their primary duties; adding that she feels odd still having in her possession a bronze medal which no longer belongs to her, while her silver medal is in the hands of others.

“…As you can see, I am wearing a bronze medal which now belongs to team Brazil as they automatically became third after they were upgraded. I still have it because the Nigeria Olympic Committee has refused to give us our silver medal, which I don’t know why.

“I am doing this video not because I need anything from them except my silver medal. Anyhow they (NOC) want to send it to us, they should please do. This is since 2016, it is a long time, other countries have gotten theirs, I don’t know why we Nigerians are yet to receive our silver medals.”

While making a passionate appeal to the relevant authorities, Idoko-Isaac insisted it is unfair to make athletes beg for what they worked hard for and is rightfully theirs.

“I worked in the snow, the rain, and the sun for that medal. I deserve to have a hold of it,” she added.

Nigeria’s only other medal in the 4x100m women’s relay is the ‘iconic’ bronze medal won at the Barcelona 1992 Games where Beatrice Utondu, Faith Idehen, Christy Opara-Thompson, and Mary Onyali did not only Nigeria but the African continent proud.

Birth of the silver medal

In August, the International Olympic Committee (IOC) stripped Russia of their 4x100m relay gold medal from Beijing 2008 after they had sanctioned Yuliya Chermoshanskaya after testing positive during the retesting of samples.

The 30-year-old, who also finished eighth in the 200m final, failed tests for steroids stanozolol, and turinabol after the application of new technology.

Her results from both events were declared void, meaning she, Yulia Gushchina, Alexandra Fedorova, and Yevgeniya Polyakova were stripped of their relay title.

That development meant Olivia Borlée, Hanna Mariën, Élodie Ouédraogo, and Kim Gevaert of Belgium were upgraded to gold after originally claiming silver in a national record of 42.54 seconds.

Nigeria, who crossed the line third in 43.04, was upgraded from third to second. Brazil now got bronze after clocking 43.14 in the final race the United States surprisingly failed to qualify.

A Nigerian team has also benefited from an upgrade. The men’s 4x400m relay team of Clement Chukwu, Jude Monye, the late Sunday Bada, and Enefiok Udo-Obong that won a silver at the 2000 Sydney Games was upgraded to gold after the USA team was stripped because Antonio Pettigrew admitted to the use of banned substances. The IOC on July 12, 2012, reallocated the gold medal to Nigeria.

While PREMIUM TIMES still awaits the official reaction sought from the NOC’s Public Relations Officer Femi Adetula, independent findings reveal the retrieving of stripped medals entails a cumbersome process, though it doesn’t have to drag on for five years.

Under IOC rules, the reallocation of medals takes place when “athletes/teams sanctioned have exhausted all their remedies of appeal and when all procedures are closed”.

Medals are usually returned to the National Olympic Committees concerned, which sends them back to the IOC.

As succinctly captured by the BBC, medal reallocation is not a quick and easy process. It is a minefield of retests, appeals, and constant calls for disqualified athletes to return their medals, which can sometimes fall on deaf ears.

In the event the repeated calls fall on deaf, the IOC falls on its last resort which is just to make a new batch of medals.

At the moment, it is not clear how far the NOC has gone in this regard or if their lack of action is responsible for the delay.