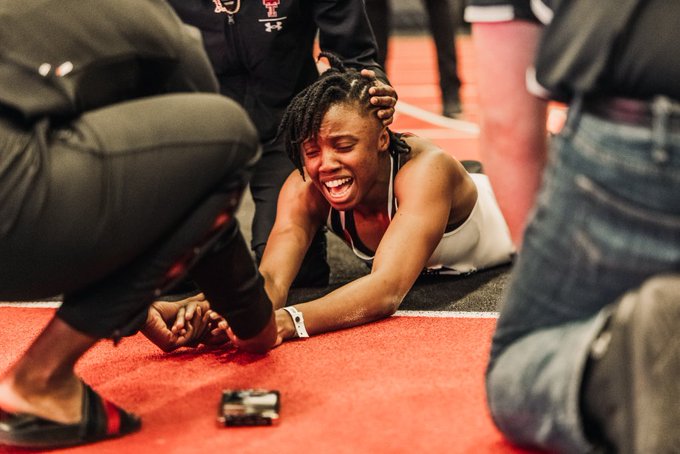 Ruth Usoro jubilates after she qualified for the 2020 Olympic Games in Tokyo [PHOTO: TW @MakingOfChamps]

With less than five months to the commencement of the rescheduled and much-anticipated 2020 Olympic Games in Tokyo, Japan, another Nigerian has qualified for the world’s biggest multi-sport event.

Nigeria’s latest entrant for the Tokyo Olympics is Ruth Usoro, who continues to impress in the College Circuit in the United States. Late Friday night at the Big 12 Championship, Usoro successfully defended her Long Jump title, and she did so in a stunning manner.

Usoro set a Championship record and tied the No. 2 indoor mark in the world with her leap of 6.82 meters, to win. Usoro, 23, finished ahead of Tara Davis, who led for most of the competition with 6.68m, while Monae Nichols was third with 6.46m.

Her winning jump is also third on the Nigerian all-time indoor list with Ese Brume.

But beyond all the marks ticked by this long jump distance, Usoro will be extremely glad she has hit the much-desired Olympic mark and can now be hoping to challenge for honours just as the duo of Chioma Ajunwa did at the Atlanta 1996 Olympics and Blessing Okagbare followed suit at the Beijing Olympics.

Only last month, Usoro set a new National Record in the Triple Jump. In her very first attempt of the year at the Texas Tech Corky Classic landed a staggering triple jump distance of 14.28m.

This mark effectively eclipsed the previous feat of 13.76m achieved by Nkeiruka Domike 10 years ago.