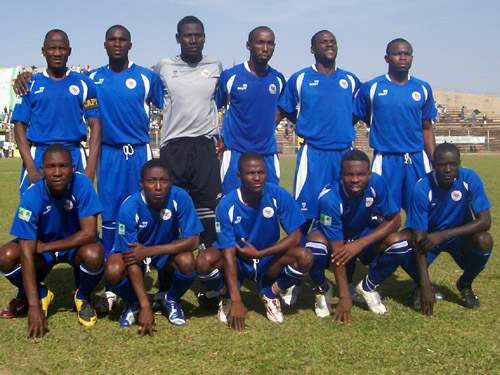 Gombe United young striker Mustapha Babadidi has set a target of three goals for himself as his team gets set to trade tackles with visiting Enugu Rangers in one of the rescheduled Week 3 Nigeria Premier League games billed for wednesday and Thursday across the country.

Babadidi who is currently on top of the scorers chart in the league with 10 goals is upbeat that Rangers will be defeated by a large margin at the stadium in Hadeja.

“It will be a tough match no doubt, but I am very sure we will win by a wide margin and something tells me I will score a hat-trick against Rangers on Wednesday. We are ready”. Babadidi told mtnfootball.com

The petite striker added that he hopes to score at least 20 more goals to bring his tally to 30 this season in order to set a new goal scoring record in the Nigerian league.

“I want to score 30 goals to set new record in NPL. I am sure I can do it, though it won’t be easy but Allah will make it easy for me and I will work hard to achieve my goal”.

Jude Aneke of Warri wolves currently holds the record of the highest goal scored in a single season in the Nigeria Premier League having netted 20 goals for his former team Kaduna united last season.

For many football fans, the top spot being occupied by Enugu Rangers looks threatened as the team with 26 points face a tough away test to Gombe United whereas her closest rivals Enyimba and Kano Pillars who are both on 23 points will be playing at home against Dolphins FC and shooting stars respectively.

While victory in their home games assures the duo of leveling up with Rangers if it is defeated in their away fixture, Enyimba and Pillars will have to be comprehensive in their victories if they are to outwit the Flying Antelopes superior goal difference.

In some other games,  Bauchi will be agog as one of the surprise package of this season, Wikki Tourist, will trade tackles with embattled Kwara United. The Ladan Bosso tutored team are currently fourth on the log, a position they have rarely occupied in their history.

Also in Calabar, Heartland will be hoping for another win against Niger Tornadoes in their newly adopted home ground.

The week three matches being fixed now by the NPL was formally postponed due to the nationwide strike in January 2012.