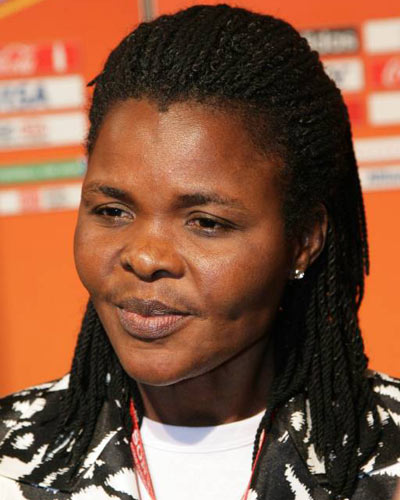 The cloud is thick with expectations as Nigerian football fans patiently await the appointment of a new head coach for the country’s arguably most successful national team, the Super Falcons.

Indeed, no ship can survive the storm or get to its destination without the help of an experienced and well-skilled captain on board to steady it through.

It is a given that every national team needs top-class managers with technical savvy to climb the ladder of success.

With the Nigerian Football Federation(NFF) stepping up its hunt for a new manager to take the Super Falcons to the next level, PREMIUM TIMES x-rays some of the top coaches that could be barking out orders from the touchline as Nigeria Women national team coach in the days ahead.

Even though it is an open secret that the NFF is favorably disposed to naming a foreign coach for the Super Falcons, Nigerian coaches who, nonetheless, are qualified and have shown intent are included in this shortlist. They may, at best, end up as assistants to whoever the foreign coach will be.

According to sources, the Dutch woman leads the pack of coaches jostling for the Super Falcons job.

A veteran as far as the women’s game is concerned, Hesterine de Reus boasts of vast extensive experience in football development and coach education in many countries, including as National Team Coach of senior and underage teams in Europe, the Middle East, and Australia.

Rues was first contacted by chieftains of the NFF in 2015 to handle the Super Falcons after a dismal outing at the World Cup. Both parties, however, failed to reach an agreement over salaries and technical issues.

Having spent most of her life playing and coaching in Europe, De Reus loves to create a more professional environment within the camp of the teams she manages without external interference.

Like Louis Van Gaal and every other Dutch coach in men’s football, she is tough, outspoken, and abrupt, a trait that is common with female managers in Europe.

In 2014, she was fired by Australia FA for her outburst weeks before the Asian Cup tournament in Vietnam.

NFF should expect to see a woman who is ready to cross the line and push as hard as possible in a bid to get what she wants from both the players and the federation.

Whether she will be willing to give up her job with UEFA to tinker Nigeria is another major obstacle. But if she eventually does, expect to see a revolutionary Falcons set up.

This 63-year old Texas-born tactician is ranked second in the pecking order of coaches vying for the post of Super Falcons manager.

Waldrum was also widely tipped to manage the Super Falcons after NFF failed to renew Omagbemi’s contract, but a good number of Super Falcons players were highly disappointed when he ditched Nigeria to team up with the University of Pittsburgh Women team in December 2017.

He is ready to give the Nigerian project a second shot and most Super Falcons players will also be happy to work with him.

The former USA U-23 national team coach is in his third season as the coach of St. Pittsburgh side where he oversaw a marked improvement from the team in 2019 with the team finishing 10th in the ACC standings.

Known for his ability to build a team from scratch, Waldrum has been NFF’s ideal choice from the word go. The board had to settle for Dennerby when the desirable was not available then.

A believer of youth and attacking football, Waldrum was lauded for introducing one of the best-recruiting classes in the program’s history for last season at St Pittsburgh.

The former Sweden national team coach was at the helm of affairs at the last Women World Cup in France when Nigeria crashed out in the second round. Quitting his job midway with a year left on his contract, the Super Falcons failed to qualify for the Tokyo 2020 Olympics.

His attitude angered most NFF bigwigs who pleaded with the Swedish tactician to stay on with the team but Dennerby opted to accept a juicy India U-17 job. He then rubbed it in by appointing former Super Falcons goalkeeper, Precious Dede, to work as India U-17goalkeeper’s trainer.

But with the Indian government’s insistence on shutting down for another three months due to Covid-19 coupled with little talents at his disposal, Dennerby is already lobbying to stage a comeback.

A top member of the NFF Technical and Development Committee confirmed that the Swede is lobbying for a return.

Realistically, his chances are very slim given the way he walked out on his employers at a time when his service was badly needed. Many felt he left unceremoniously and threw the baby out with the bathwater. Besides, some sections of the press believed he never impacted the team tactically while in-charge.

Dennerby has his camp within NFF and in a country where anything is possible, his return is a matter of never say never should he choose to return.

A member of the all-conquering 1998 Super Falcons, Omagbemi etched her name in the history book as the first woman coach to win AWC trophy as a player and coach. Nigeria saw off threats from Cameroon to emerge African champions for a record eight times in 2016.

She began her career with several US teams before she was named interim coach of the national side, having previously been an assistant coach to the Nigerian women’s national under-20 football team.

Her success in Cameroon lends credence to the fact that the former Pelican Star coach has come of age. But Omagbemi’s chance of beating her foreign counterparts to the job is not looking bright with NFF bent on hiring foreign technocrats.

She could eventually end up as an assistant coach to her foreign counterparts after the NFF accused local coaches of holding the country to ransom.

Mercurial Mercy was highly tipped to take over from Thomas Dennerby but her dream of managing Super Falcons will have to wait for a while if feelers from NFF Secretariat are anything to go by. But she must be commended for taking up the challenge after NFF urged ex-internationals to apply for the vacant post.

Regarded as one of the most prolific strikers, the 44-year old smiling coach began her coaching career with Stars Soccer Club where she worked her way up to become the head coach for Stars U-16 Athena C Gold Girls.

She believes in youth development

But she is willing to give it a try with the team she once played for. According to her, the best way to give back to Nigeria is to serve as national team coach

In an interview with ACLSports recently, she said: “I try to make sure I take care of all the aspects. So I don’t mind whether it is the junior team or the Super Falcons, I am ready.

She added: “I don’t care what level. If you want to be a good coach like I am, I can coach even a cripple, if you come to Virginia Beach (where she lives in the USA) and ask for any female coach, they will call my name, that’s how good I am with both little kids, adults medium, whatever,”

This former Super Falcons striker has not given up her dream of managing Africa’s most successful female national team once again and she has continued to drum it to NFF bigwigs that she is the best for the job.

Ms Uche remains the only woman to guide the side to win the Africa Women’s Championship (AWC) as well as a campaign at FIFA Women’s World Cup.

Regarded as one of the pioneers of women’s football in Nigeria, she believes other African nations are fast catching up with Nigeria and that Super Falcons are yet to prove its worth at the global stage.

She wants to change that if given the opportunity to serve again.

As it is customary with high-profile recruitments of this nature, some twists and turns are not impossible leading to new names popping up and already shortlisted names dropping out.

However, whoever bags the job would be operating under the immense pressure of maintaining Nigeria’s unrivaled dominance in Africa.

Also, whoever the chosen one is, he or she is expected to raise a crack side that can punch above its weight and rub shoulders with global women’s football heavyweights, going forward.

LIFESTYLE: EtiquettewithEti: How to apply fragrance without inconveniencing others