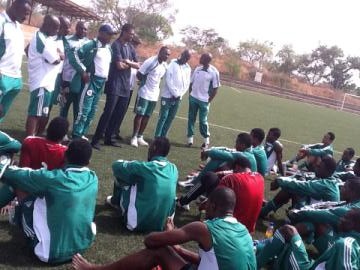 Tuesday training of the national team, the Super Eagles, was almost turned into a carnival, following the unannounced presence of former national team skipper and two-time African Footballer of the Year, Nwankwo Kanu.

The training which took place at the usual FIFA Goal Project site had gone on for barely 1 hour, when Papilo, as Kanu is fondly called, stormed the arena with three of his aides and he immediately caught the fancy of both the media, the technical crew and players who were sweating it out under the hot Abuja sun, which then stood at 35 degrees Celsius.

Kanu took a brief time off Head Coach Stephen Keshi’s hectic training schedule to whisper salutations into the ears of his former captain and waited patiently for training to end in order to address the players.

Addressing the team, Kanu initially started by saying jokingly that he has come to battle for a shirt in the squad, to which Keshi replied that he was welcome, since he still features regularly for Pothsmouth FC in the English championship.

Speaking seriously, Kanu said he has come to identify with all the players and to build the much needed confidence in them, as every Nigerian has the belief that the national team can go to Kigali in Rwanda next week to pick the three points at stake.

“You have to have confidence in yourself and to be determined and not be shaky because some of your brothers are coming from Europe to join the team. They all started from here like you and you should show them that you can play as well as they can and demonstrate it when you engage Rwanda in Kigali”, he said.

He praised the courage and belief of Keshi in the players and urged the players to repay Keshi with wins in all their qualifying games for the South Africa 2013 Nations Cup and the Brazil 2014 World Cup qualifiers.

Team skipper, Chigozie Agbim, who replied on behalf of the players, thanked the icon for finding time to visit them in training and assured that the team will not let him and the Nigerian public down when they confront Rwanda in eight days’ time.