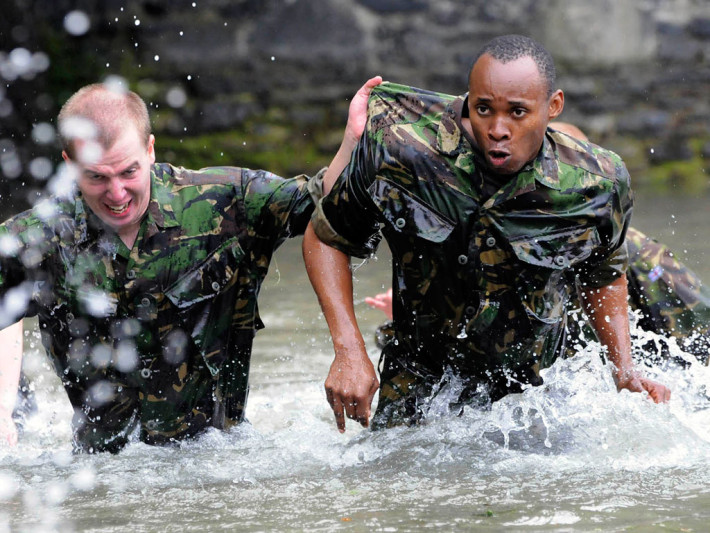 While many were expecting him to return to the track to compete or at worst take to coaching like some of his predecessors, Africa’s fastest man, Olusoji Fasuba, has finally bid the tracks bye as he begins a new career with Britain’s Royal Navy.
Fasuba who has been hit with injuries in recent times had always complained about the lackadaisical attitude of Nigeria towards her athletes and has never hidden his desire to seek a better future outside of sports.
The African 100m record holder, an Olympic bronze medallist and former indoor 60m world champion is regarded as one of the fastest men on the planet.
Nicknamed “Flash” by his shipmates, Fasuba has just completed nine months of training to become a logistics specialist in the Royal Navy.
Fasuba 27, said he decided to retire from professional running to provide a more settled life for his wife and baby daughter.
Before joining the Navy last May, Fasuba also has to his long list of Medals a bronze in the 4x100m relay at the 2004 Athens Olympics, gold in the 100m and 4x100m relay at the 2007 All-African Games and gold at the 2008 Indoor Championships at 60m.
In 2006, he set an African record in the 100m of 9.85 seconds, just 0.27 of a second slower than the fastest man in the world,  Usain Bolt.

A better future
In an interview with UK Sun newspaper, Fasuba said he was already fulfilled as an athlete and so he wanted to try out his talents elsewhere.
“I’ve had a very good career in athletics and been there with the big boys, but I was looking to the future and wanted to settle.
“My father used to work for the Nigerian Navy, so from a young age it was all about the Navy.
“Some of my friends are serving in the British Army and tried to persuade me to join, but for me, it had to be the Royal Navy.
“Training has been my way of life for a long time. Growing up in Nigeria, discipline is very strict, so that aspect of being in the Navy wasn’t really a shock.”
Now a junior sailor, Fasuba hopes to complete a full career in the Royal Navy and maybe transfer to the Officer Corps at some stage.
He is keen to apply for British citizenship, but was eligible for his current post due to Nigeria’s Commonwealth membership.
Olusoji lives with his wife, 400m runner Ngozi Nwokocha, and their seven-month-old daughter, Annabelle, in Plymouth, Devon.