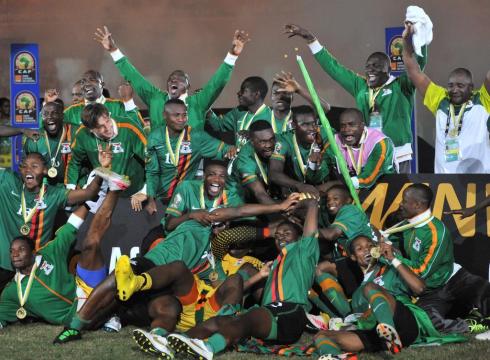 A former Super Eagles Coach, Adegboyega Onigbinde, on Monday said that Zambia’s victory in the just-concluded 28th Africa Cup of Nations (AFCON), showed that “big names do not play football”.

“The end of the competition only proved that big names don’t play football.  The 16 countries that qualified for it are the best.

“Big football countries like Nigeria, Cameroon and Egypt did not qualify; by simple logic, it means those that did not qualify are not good enough,” he told the News Agency of Nigeria (NAN) in Lagos.

Mr. Onigbinde, who was reacting to Zambia’s victory over Cote d’Ivoire on penalties in Libreville on Sunday, said the Zambians proved that African players were blessed with skill and strength.

The former coach said the finals had nothing to do with which team deserved to win and noted that in football “the best team wins”.

He urged Stephen Keshi to continue with the search for home-based players, adding that “if the Zambians can do it, we can too”.

He said that there were no minnows in African football, adding that Nigeria should learn from the Zambia’s victory and stay focused in its preparations for 2013 AFCON.

Sports analyst, Ayo Ositelu, said the Zambians did not earn their victory by luck or fluke but with great determination and focus.

He also said that most of the players were recruited from their local league with many of them willing to die for their fatherland.

“This is a big lesson for us. Nigeria should concentrate more on its local league to build a team and not celebrating the professionals who save their legs for their clubs,” he said.

He said that Nigeria should start preparing for the 2013 AFCON because the game had become competitive and no team should be underrated.

Joseph Dosu, Nigeria’s U-23 team goalkeeper to Atlanta ’96 Olympic Games, said the victory of the Chipolopolo was the result of determination and hard work.

He said that the loss of their team in an air mishap in 1993, off the coast of Libreville, spurred them to victory.

“I think the victory is a big one as they are the least expected country to emerge African kings,” he said.

Former Super Eagles midfielder, Thompson Oliha, said the two teams were both winners and the world should watch out for Africa at the next World Cup.

“With their performance, the best is now in Africa,” he said.

Mr. Oliha, who played for Africa Sports of Cote d’Ivoire, said the match brought back good memories of the 1994 AFCON when Super Eagles defeated the Chipolopolo 2-1 in the final.

Jonathan inaugurates SURE board