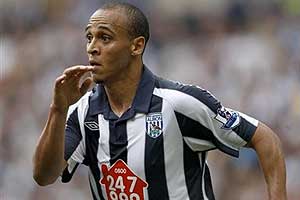 Super Eagles striker and Westbrom hitman, Osaze Odemwingie, was in superb form Sunday afternoon as he netted in three of the five goals scored by his team against Wolves in one of the day’s Premier League games in England.

Odemwingie opened scoring in the first half before Wolves forward, Steven, equalised on the stroke of half-time.

Jonas Olsson restored the Baggies’ lead after a woeful blunder by Wolves goalkeeper ,Wayne Hennessey and Odemwingie put Albion in total control with the third.

Keith Andrews netted the fourth in the closing stages and Odemwingie completed his treble moments later to seal Albion’s biggest win (5-1) at Molineux since 1962.

With this latest victory, Albion are now eight points clear of the relegation zone, while Wolves slump into the bottom three, below Blackburn on goal difference.

Osaze who had started the season on a torrid note, due to injuries and loss in form, is now gradually getting back to his strides.

The light-skinned Super Eagles fast paced attacker  made the headlines for the right reasons last season; netting 15 goals and emerging player of the month twice.

Already West Brom coach Roy Hogdson is backing Osaze to replicate the same feat as he constantly reiterated his believe in the ability of the Nigerian.

Back at home, Super Eagles coach Stephen Keshi said he was impressed with the improved performance of Nigerian players abroad. Aside Osaze, the likes of Yakubu Aiyegbeni, Sone Aluko, Joseph Akapla among others were all on target for their respective clubs.