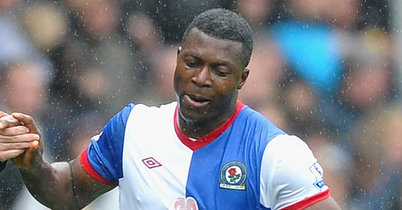 After serving out his three-match suspension owing to the red card received in the game against Fulham, Super Eagles and Blackburn star striker, Yakubu Aiyegbeni marked his return to action with a goal against fellow strugglers, Queens Park Rangers.

Yakubu’s strike was the first of three goals for Rovers but a late surge by QPR made sure the game ended in a more respectable 3-2 scoreline for Taye Taiwo and teammates.

For many, Yakubu’s 13th league goal of the season might have secured him the long anticipated recall to the national team.

Super Eagles coach, Stephen Keshi, has maintained that Yakubu will get a recall to the national team once he keeps up his goal-scoring form.

The Eagles are billed to face Rwanda on February 29 in an Africa Cup of Nations qualifying match.

Meanwhile, in other English Premier League games involving Nigerian players, it was a sad comeback for Chelsea’s Mikel Obi as his side slumped 2-0 to local rivals Everton.

Victor Anichebe of Everton is however full of smiles as his team completes the trouncing of the top four Premier League teams.

Also, another Nigerian, Dickson Etuhu, was on the winning side as Fulham pipped Stoke City 1-0.